The Bandit Camp is an outlaw stronghold located in levels 17 to 24 Wilderness. It contains numerous bandits that are aggressive towards unskulled players; the weaker Guard Bandits patrolling the edges of the camp, along with Bandit Brawlers and their leaders roaming inside. Prior to entering the camp, it is recommended to have Mr Ex skull you or wield an item with the Committed perk. In addition to keeping the bandits tolerant of the player, it also allows them to use Noterazzo's shop.

Most of the camp's history remains unknown, though like many ruins found in the Wilderness, it was presumably an outpost to watch over the Zarosian town of Dareeyak, village its close proximity to the village. It was most likely destroyed during the Gielinorian God Wars though what battle took place there is exactly unknown.

Sometime during the Fifth Age, a group of bandits led by Speedy Keith, Black Heather and Donny the Lad decided to make the ruins their base of operations, having fled into the Wilderness to avoid the authorities of Misthalin. The bandits quickly took advantage of the desolate Wilderness, taking spoils from "tresspassers" and the monsters of the land; all three leaders appear to have a Slayer level of 94, as Heather uses a staff of darkness, Keith uses a strykebow and Donny uses a lava whip.

Speedy Keith explains to players that the bandits are friendly to skulled adventurers because they can tell when someone is marked by their intentions, and trust those who are willing to put themselves at risk, stating that the overly cautious don't belong in the Wilderness.

Following Guthix's death in the Sixth Age, the bandits have kept themselves relatively quiet to avoid unwanted attention. Donny the Lad states that the bandits don't like the warbands scattered across the Wilderness, though he enjoys the healthy competition and points out how being greedy in the Wilderness is dangerous.

The bandit camp general store, owned by Noterazzo, is one of the few places to obtain bloodweed seeds, in addition to various items such as materials to create tier 90 power armour. Notterazzo's shop is unique in the fact that he charges less than other places; for example, buying the Stone of binding from the Magic Guild will cost the player 500,000 coins, while Notterazzo himself will charge the player 450,000 coins. The player will need to be skulled in order to use his shop though, or he will refuse to sell items to them. Opening his shop while skulled completes the medium Wilderness task Notatrivialtask.

Originally the store would buy items at High Alchemy prices, though this was changed following the Grand Exchange's release. The lower prices of the items are attributed to the fact that he is not taxed, due to the dangers of the Wilderness.

Occasionally, Postie Pete can be found in the store, doing a "secret mission for the Burthorpe Imperial Guard".

Neil sells Wilderness team capes ending in the number 7. He is located in (or near) the remains of the building next to the General Store. He is one of the wandering bankers that can be located in the Wilderness and can be easily accessed via the western entrance of the camp. 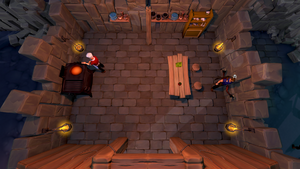 Tony's pizza store, with tomato and cheese respawns on the table.

The camp has a kitchen to the north, which contains tomato and cheese respawns. It is also home to an outlaw named Fat Tony, who had to flee Misthalin after he was accused of attempted regicide by poisoning the King's food. The bandits protect him as long as he continues to make pizzas for them.

Tony will sell pizza bases for 4 coins each. This, coupled with the respawns in the room (30 seconds respawn) and the range in the kitchen, means that a player with adequate funds could buy and make pizzas here. They could then be sold to the general store and the money used to continue to buy pizza bases. Creating an Anchovy pizza by scratch in the Bandit Camp and giving it to Fat Tony is a medium Wilderness task A Pizza the Loot.

The major drawback is the slow respawn time of the tomato and cheese (30 seconds-1 minute), and the possibility of PKers dropping by. If the player finds himself/herself in a PK situation, or is in need of more ingredients, he/she can always change world.

As there is also a small net fishing spot and a giant rat respawn nearby, a player could add meat or anchovies to the pizza, provided that they have the required Cooking level. 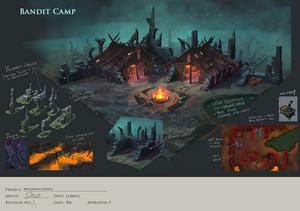