From the RuneScape Wiki, the wiki for all things RuneScape
Jump to: navigation, search
The Old School RuneScape Wiki also has an article on: osrsw:Wild dog 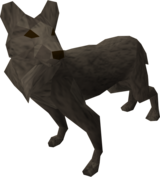 Wild dogs can be found in the Brimhaven Dungeon, except in the iron and steel dragons area. They are generally considered a pest by low levelled players due to their tendency to attack and pile them while they are fighting other monsters, but are of minimal threat to higher levels. They have a considerable hunt radius, as they can detect you about 4-5 squares away. They use melee and have a maximum hit of 100. They will ignore players with a combat level of 75 or higher. Their aggression is usually not an issue, since most players capable of accessing the dungeon will generally have sufficient combat experience to make them tolerant.

While wild dogs can be very annoying for low levels, they can be killed for their bones. Then, a player can use the Bones to Peaches or Bones to Bananas spell on the bones, thus extending the player's stay at the Brimhaven Dungeon. They can also be killed for a dog slayer task.

With Karamja gloves 4, players can deal double damage against Wild dogs. However, this perk is essentially useless given the elite task set's requirements.