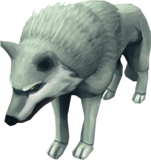 A white wolf is a wolf found on the west side of White Wolf Mountain. It can be dangerous for inexperienced players, because they are aggressive. They can sometimes be a nuisance due to the fact that they are on the path from Taverley to Catherby. They can easily kill a player by sheer number. Its bones can be used with a chisel to create wolftips for use in Big Chompy Bird Hunting.

With the Troll Warzone update all the white wolves that were on the east side of White Wolf Mountain were replaced with Adolescent white wolves.

According to Armies of Gielinor, they were the first race to be brought in by Guthix.

The update history project is a work-in-progress – not all updates to this topic may be covered below. See here for how to help out!
Retrieved from ‘https://runescape.wiki/w/White_wolf?oldid=34714953’
Categories:
Hidden categories: