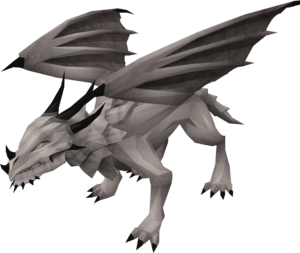 White dragons are a type of dragon created from the Queen Black Dragon's eggs mixed with Kerapac's blood. White dragons are imbued with a type of magic that allows them to travel between different planes simply by flying.[1] Although the white dragons retained the Dragonkin's intelligence, they had almost no aggression and as such, were deemed failures by their creators.[2]

To travel between different realms of existence, white dragons cut open small portals that allow them to fly through the Abyss to other worlds, but they can only go to places that they know of.[1][3]

The dragons were hunted to supposed extinction during the Third Age, as their dragonhide was used for the creation of third-age ranger armour. As they preferred a solitary lifestyle, they were quickly overpowered and killed. By the time the other white dragons were aware of this, it was too late.[4]

During One of a Kind, it is revealed that only one white dragon remains, named Therragorn. She was hidden in a dungeon underneath the Wilderness by the King Black Dragon to protect her from hunters[5], although she was forced to flee when a trio of hunters trailed the King Black Dragon, Hannibus and the World Guardian. 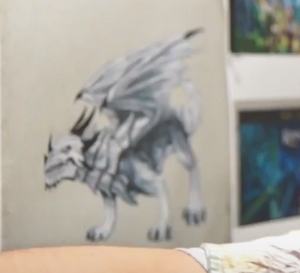 In addition, the Queen Black Dragon during the One of a Kind quest divulges that the Dragonkin took her children (white dragons) and imbued them with twisted powers (Abyssal magics), which drove the dragons completely mad, due to being in so many places at once.[6][7] The dragons were changed into a completely different species, celestial dragons, as a direct result of the Dragonkin's experiments. These dragons were first created in the Dragonkin Laboratory, although a few of them were eventually relocated to Dragontooth Island.

Vicendithas was able to infuse a white dragon egg with elven crystal and Kerapac's blood, creating an entirely new species of dragon capable of changing sexes at will.[8][9] This dragon, in turn, gave birth to what would come to be known as gemstone dragons, named as such because of the gemstones that grew naturally from their bodies.[10]

The ability for the white dragons to fly between planes of existence may be referencing the Pern series by Anne McCaffrey (in which dragons can teleport via hopping into and out of another plane) and specifically the white dragon, Ruth.