From the RuneScape Wiki, the wiki for all things RuneScape
(Redirected from White Knight equipment)
Jump to navigation Jump to search
The Old School RuneScape Wiki also has an article on: osrsw:White equipment

To wield White Knight equipment the player must have completed the Wanted! quest, and have at least 25 Attack to wield weapons, 25 Defence to wear armour, and 25 Magic to wield the magic staff. It is uncommon to see players wearing White equipment because all players who have completed Wanted! have already completed Recruitment Drive, which provides a superior set of armour, Initiate armour.

To obtain White Knight equipment, a player can either buy items from Sir Vyvin in the Falador Castle or trade with another player as well as buying it on the Grand Exchange. Players wishing to purchase armour from Sir Vyvin must have the appropriate White Knight rank, as shown.

Having the master rank is one of the requirements needed to get a trimmed completionist cape and the master quest cape: White Knight Rises.

In order to increase ranking and unlock equipment items, players must kill Black Knights. Black knights killed as a non-member character that has completed Wanted! still count toward the kill count. Each player begins credited with 100 kills at the rank of Novice. Players that have begun While Guthix Sleeps can choose to slay the Elite Black Knights over regular Black Knights. Each one slain counts for 12 regular Black Knights slain. If players kill White Knights, their ranking will decrease. Each White Knight killed removes one Black Knight kill from a player's ranking. Players can check their rank by viewing the entry for Wanted! under their quest journal, or by Quick Chat entry 'FS8'.

A number of White equipment consisting of:

This armour can be stored in the armour case of the player-owned house. However, white armour cannot be packed into set objects. 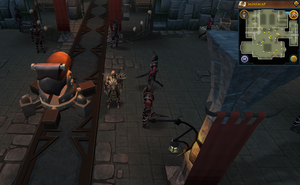 Location to stand behind cannon.

A good method to kill lots of Black knights is to go to the Black Knights' Base in the far south of Taverley Dungeon. If possible players can use a Dwarven multicannon to speed up the kills as well as prayers/ancient curses to boost skills or pray for melee. In that case it is also advised to use a Demon horn necklace with a Bonecrusher to keep replenishing prayer points at high rates (this can virtually remove the need for prayer potions). Bringing a Demon executioner summoning familiar with Ring of fire scrolls will speed up kills even more. When in the dungeon, place the cannon 8 squares from the front of the northern entrance, and two squares west of the eastern pillar. Stand 1 square East and 2 squares South of the base of the cannon. Never leave this position.

Turn on Torment and Auto Retaliate, and don't move. Let the cannon bring the knights toward the cannon. Fire the cannon and drink potions when needed, occasionally use Soul Split if needed. This method is possible to give 800 kills an hour.

For maxed players, stand at the cannon centre with auto-retaliate on, no need for any prayer, potions or food. Double drygores or chaotic rapiers allow players to Flurry a few times a minute, good for 2-8 kills each time. Using Sacrifice every now and then recovers what little health is lost. Also using the special move Ring of fire of the Demon executioner summoning familiar for 2-20 kills per scroll. Bandos armour or equivalent is more than enough. This method yields 2,000 kills an hour and costs approximately 2,000 cannonballs.

By accessing the Black Knights' Catacombs or Lucien's camp, players can kill Elite Black Knights to achieve master rank. This requires at least two attack styles since these Knights can nullify damage from an attack style unless they take damage from another style or prayer wears out after a number of hits. Therefore, a high level combat summoning familiar (that uses attack style you are not using), very high-hitting weapons and spells along with some supply of food are recommended. Equipment and abilities that provide hybrid capacity are recommended. Although high-hitting can possibly one-shot the knights it could waste time if they are not quickly finished, so alternatively fast-hitting weapons and abilities like Corruption Blast can deplete their prayer quickly.

A Dwarven multicannon and Dreadnips can be used to speed up kills here, provided that the player brings a different combat style. With a high-level loadout, familiar, Dreadnips, and a cannon, approximately 3,000 kills per hour can be achieved if the player camps in an area with 3 Elite Black Knight spawns.

Note that other monsters with the name "Elite" are not counted as knights if they are killed. Although they do not hit high they also have prayers that make them resilient and pile damage steadly onto the character. The player should focus on killing knights as soon as they respawn.

An example setup would be:

This adds up to all three attack styles.

Initiate armour can be obtained after completing the Recruitment Drive quest by buying it from Sir Tiffy Cashien in Falador. It requires 25 defence and 10 prayer to wear. This armour has the same stats as its Black and White armour counterparts, but with a superior prayer bonus.

Proselyte armour can be obtained after completing the Slug Menace quest from Sir Tiffy Cashien in Falador. The quest is a requirement for wearing the set, along with 30 Defence and 20 Prayer. It has the same stats as its Mithril armour counterpart (except for the Prayer bonus).