What's Mine is Yours

From the RuneScape Wiki, the wiki for all things RuneScape
Jump to navigation Jump to search
For the achievement, see What's Mine is Yours (achievement).

What's Mine is Yours is a novice quest in which the player helps revive Doric the dwarf's dying business. Its release replaced Doric's Quest.

Dwarven master smith Doric has fallen on hard times, and he needs your help to rekindle his client list and keep bankruptcy at bay. You'll travel the length and breadth of Asgarnia, getting to the bottom of an unscrupulous plot to undermine Doric's business, showing off your smithing chops as well as your sword arm.

Head over to Doric's Hut, located north-west of the Falador lodestone, and speak to Doric. He tells you that his business is ruined, since the past few months he's been getting minimal orders, even from loyal customers like Nurmof, who cancelled his pickaxe order from Doric. To make matters worse, his son Boric, who finished his studies at Keldagrim and was supposed to be home weeks ago, is nowhere to be seen.

When asked, he mentions that his last remaining customer is Sir Amik Varze, the leader of the White Knights in Falador. You then suggest providing Sir Amik with the smith's best work, hoping to spread the word to potential buyers. Doric accepts.

The master smith tells you that he is low on the raw materials, namely high-quality ores, which produce the finest work ever. He would like you to obtain them for him, as he must wait in the hut for his son's return. The ores that he wants are:

Doric hands you a mining sites map and an ore bag for locating and storing the special ores respectively. The sites that you have to go to are the Dwarven Mine, Rimmington mine, the south-west and the south-east Varrock mining site. 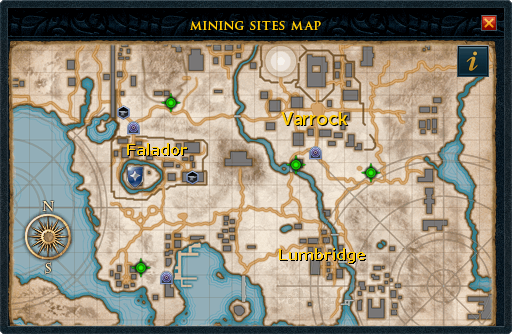 The mining sites map, with all 4 locations completed. 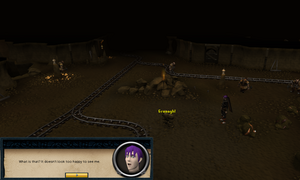 A creature of living rock appears! 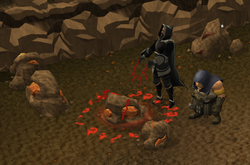 Visit each of the specified mines and mine a copper or tin rock for ore. As you gather ore at each mine, a Living rock brawler appears each time, to attack you. You will also receive a message saying: "A creature stirs to life as you're mining. You notice it is partly made of ore." If you do not mine the specific ore, the brawler will not appear.

When you kill the animated brawlers, they drop a high-quality ore each. Also, the brawlers located at the south-west and south-east Varrock mining sites drop a broken anvil amulet and a wizard's diary respectively.

As you enter the Rimmington mining site, you see a cutscene of a certain Dark Wizard Elijah and a concealed dwarf that talk about enchanting some of the rocks to prevent obtaining the ore. The dark wizard then casts a spell and teleports away.

After mining all the ores, make your way back to Doric. A fast way is to use the Falador lodestone and then walking north-west. 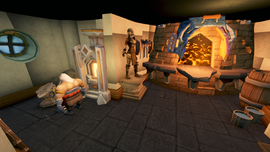 The furnace and the specially designed anvil.

Speak to Doric and tell him about the living rock brawlers, the dark wizard and the dwarf. You will also show him the wizard's diary and broken amulet, which he recognises as the Gofannon amulet, known to help in training.

Now that you have gathered the ores, Doric's second request for you is to use them to smith a bronze sword and a bronze dagger as samples for bringing in new orders for Sir Amik. The weapons must be smithed on the anvil in Doric's house as it was "designed especially for working with this high-quality ore".

Aksel stands at the entrance to the workshop, which is in east Falador. When you speak to him, he'll comment on the good quality of the weapons and agree to have one of his master smiths finish them. Aksel will then hand you the finished bronze sword and dagger.

Once they are made, you must show them to Sir Amik's squire, Cerlyn, who'll grant you audience with Amik himself. Cerlyn is in the White Knights' Castle in the western tower, on the ground floor[UK]1st floor[US]. However, he says there already is a dwarf speaking with Sir Amik, claiming to represent Doric. You tell him it must be an impostor and Cerlyn will take the weapons off you before rushing to interrupt the meeting with you.

A cutscene will ensue showing Sir Amik and the concealed dwarf having a conversation. Amik is just about to close a business deal when you walk in and explain the situation to Amik, who forces the dwarf to reveal his identity. The dwarf shows himself to be Doric's lost son Boric, who seems to have a grudge against his father. Sir Amik will dismiss both of you and you'll automatically take Boric back to Doric to resolve his issues.

Back in business[edit | edit source] 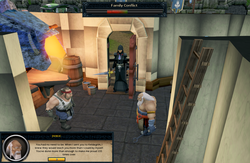 The father and son raise up some sparks when they re-unite, so you must talk to them and try to settle the family feud. To fix their relationship, you will need to help them see eye to eye, by having Boric explain to Doric why he didn't want to be sent to Keldagrim, and Doric explain that he was only trying to do what was best for his son. Successfully persuade the two to reconcile and they will agree to restart the business together. If you take too long, you'll get a warning and a few dialogues later you'll be forced to stop and start again. If you accidentally back out of this conversation you will have to start from the beginning again.

Doric tells you that he has planned to restart his business, naming it "Doric & Son" and you as its brand new partner. Boric gives you eight more high-quality bronze bars and asks you to smith some ornamental armour and a sign to get it started. Smith the ornamental chainbody, ornamental platebody and shop sign on the anvil and hand them to Doric. They also ask you to go down the steps inside the house and mine the rocks blocking the way further down into the mine.

After opening the passage, go back upstairs and let Doric know that the job is done. A cutscene shows the father and son formally opening their business together. 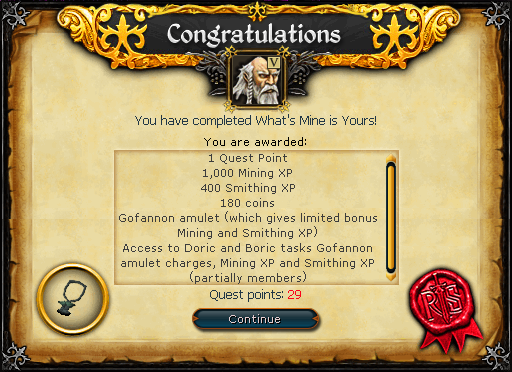 What's Mine is Yours is directly required for the following quests/miniquests: