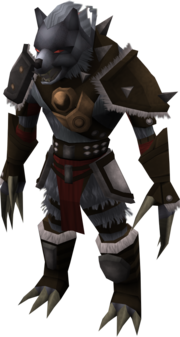 A werewolf warrior at the God Wars Dungeon.

Werewolves are a race of shapeshifting humanoids. They can choose to either appear as humans or as bipedal wolves. The majority of them worship Zamorak and consider it an honour. They are great hunters and have served as Zamorak's foot soldiers during the God Wars. They live mainly in Morytania.

Werewolves were one of the many races living in the Zarosian empire[1], including Senntisten.[2] At some point during the God Wars, the werewolves were enslaved by Zamorak and forced to fight for him.[3] Later , werewolves served as part of Zamorak's army in the campaign to take Morytania from Zaros. Though they initially resisted, they were swiftly defeated and incorporated into the Zamorakian forces.

When Zamorak learnt of the godsword, he sent his general K'ril Tsutsaroth to take the blade, including werewolves in the forces placed under K'ril's command. They forced the Armadylean forces to take shelter in the Temple of Lost Ancients, where they followed. The mage Aeternam cast a freezing spell on the Temple, leaving all combatants frozen in place. When the Temple defrosted, the combatants, werewolves included, resumed their bitter fighting.

Werewolves cannot normally pass over the River Salve and into Misthalin due to the enchantments on it preventing Zamorakian creatures from passing over. However, at least four werewolves have been known to make it over the river. At some point in 164 of the Fifth Age, the young werewolf Gar'rth and his uncle Jerrod managed to reach Asgarnia, and in 169 of the Fifth Age two shadowy figures also bypassed the protective barrier and began abducting humans. The knowledge of how to bypass the barrier is not common though, as another werewolf attempted and failed to penetrate the barrier.

Vanescula Drakan mobilised the werewolves for war near the end of the Fifth Age in an attempt to conquer the kingdoms of Misthalin. However, her attempts were foiled by an adventurer and Ivan Strom, who managed to bless the river so potently that her vyrewatch reverted back to humans when they attempted to cross. She attempted to order her werewolf auxiliaries to attack, but they refused, stating that they had smelled the "winds of defeat" from her and blatantly deserted her army. Following her disastrous loss, the werewolves declared independence from the vampyres, though King Roald III would keep a close eye on the river, as the increased blessing was meant to deal with vampyres, not werewolves.

Canifis is a small village near the River Salve. It is populated nearly entirely by werewolves. It was settled in Year 23 of the Fifth Age, and is the former location of the Zarosian fortress Kharyrll. In 164 of the Fifth Age, the village was burnt down, but it was rebuilt sometime later.

Darkmeyer is the city of the vampyres. Amongst the inhabitants are various werewolves, such as the Canifis settlers. Despite their lower ranking status, it is possible for werewolves to operate businesses in Darkmeyer.

Werewolves have great physical strength, easily being on par with barbarians at a young age. They have black blood.[4] Similarly to wolves and dogs, chocolate is toxic to werewolves. [5]

Werewolves tend to have a lower breeding rate than humans, and as such they consider each pup to be a blessing. It is considered to be a great criminal offence to kill a female werewolf of breeding age. When the werewolf Gar'rth ran away before he was considered an adult, his uncle Jerrod was dispatched to bring him back.

Werewolves are capable of interbreeding with humans with the resulting offspring being a werewolf. This is rare though - to date, only one pup has been knowingly produced from such a pairing.

Contrary to popular human belief, a bite from a werewolf cannot transform a regular human into a werewolf. [6]

Werewolves live as thralls of the vampyres. In exchange for the protection of Lord Drakan, they offer up a blood tithe on a weekly basis, either in the form of their hunts, usually human travellers, or one of their own if they are unable to meet their quota. Though this may be harsh, they consider it a worthwhile trade, as they know how dangerous he is. They tend to live in enforced poverty, despite having massive wealth in their stores. Disobedience and insurrection often results in swift retaliation.

As natural hunters, werewolves enjoy the thrill of a hunt. Werewolves enjoy eating raw meat, as the blood spilled gives them the flavour they desire. Although they are known to eat most types of meat, eating cats appears to be frowned upon werewolf society.

Werewolves hone their physical capabilities at the Werewolf Agility Course, practicing on deadly obstacles and Skullball to hone their accuracy.

Werewolves are worshippers of Zamorak, who they see as a benevolent deity[7] protecting them from the evil Saradomin.[8] Every year, they have a holiday called the Festival of Zamorak in his honour. When werewolves come of age, they participate in a ritual involving slaying an innocent to show their devotion to Zamorak and gain their full potential.

Werewolves believe in an afterlife known as the Great Forest.

The werewolves have a champion at the Champions' Guild. However, they cannot be fought at the current time.