From the RuneScape Wiki, the wiki for all things RuneScape
Jump to navigation Jump to search
Werewolf? (edit) 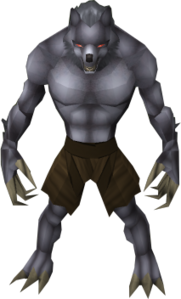 A werewolves is encountered in the Heist minigame. He appears in the Canifis scenario. Players on the Robbers team can take his form to disguise themselves and evade players on the Guards team.

Werewolves in the Canifis scenario are infected creatures. A player in this disguise can turn other NPCs into werewolves as well. This means that, eventually, all citizens could potentially look the same, allowing the robber to blend in better.

When a werewolf spawns, a message "An infected creature has spawned!" appears to all players in the Heist game.

This information has been compiled as part of the update history project. Some updates may not be included - see here for how to help out!
Retrieved from ‘https://runescape.wiki/w/Werewolf_(Heist,_Canifis)?oldid=35653478’
Categories:
Hidden categories: