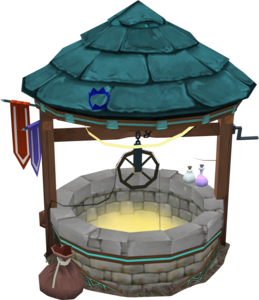 The Well of Goodwill is a special well located outside of the Grand Exchange main entrance. Money, items tradeable on the Grand Exchange, and bonds could be donated to it, to be given to real-life charitable causes chosen by Jagex. Every 10,000,000 coins equated to $1 up to the last week in November 2013, when the amount increased to $2. For every bond donated, $4.70 is donated to charity.

Donating amounts of coins or items earnt a player up to 5 titles. Donations carried over across the opening periods, allowing the titles to be earned over time.

After the Clue Scroll rework in February 2018, the well was moved behind the wall outside the Grand Exchange to make room for Zaida and the Clue scroll hub. The donate option was also removed from right clicking the well with this update, therefore only making the well a bank.

Despite its popularity, the Well of Goodwill will not be used for charity events for the foreseeable future.[1]

It is more effective to give Bonds than coins as long as a Bond price never exceeds 47 million coins (at the evaluation of $1 per 10 million coins, with bonds at $4.70 per bond).

The first opening lasted a month, from 30 October 2013 to 30 November 2013. On the 30th the well closed, and no new donations could be made, but the well itself remained in game, to be reopened with a different set of recipient charities. Attempting to donate after the closure gives the message "The charity event has now finished. Thank you for the support."

During the Double Experience Weekend from 21 February to 24 February 2014, players could once again donate wealth to the Well. All proceeds went to the SpecialEffect charity while Jagex was doing a 24 hour stream. Approximately 36 billion coins worth of items and 3,600 bonds were donated.[2]

The well was opened during November 2014, with a total of 512 billion gold worth of items donated.[3]

The Well of Goodwill was open a fourth time on 20 February 2015 for the Bonus XP Weekend.

During the Bonus XP Weekend related to Gameblast 2016, the Well of Goodwill opened again on 26 February 2016.

A player donating coins to the Well.

The chosen charities for the 30 October to 30 November period are: