From the RuneScape Wiki, the wiki for all things RuneScape
Jump to: navigation, search
The RuneScape Classic Wiki also has an article on: classicrsw:Well
For the well used to make potions, see portable well.
Well? (edit) 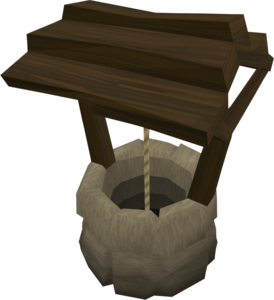 A well is a water source that is relatively commonly found around Gielinor. Wells are not just in towns and cities but can also be found throughout the countryside.

Previously, the only vessel that players could fill from a well was a bucket, since it has a handle to attach to the rope to lower it down and pull it up again. Anything else would be lost down the well. However, this was later changed and now all types of water containers may be filled with a well.

Amongst other places, players can find well(s) in:

During Garden of Tranquillity, players have the option to throw their activated Ring of charos into the Edgeville well. It may be later reclaimed with a Fishing rod.

There are three wells located in the Underground Pass dungeon. They are not a water source.

After Hunt for Red Raktuber, a PBJ Agent polar bear may pop up in a well every few seconds in the Penguin Hide and Seek weekly game of Distractions and Diversions. The location changes regularly, and is the same in every world. The polar bear agent may be spotted once a week for one penguin point.

On 30 October 2013, Jagex released a special wishing well near the Grand Exchange where players can donate their in-game items, bonds and money that will be put forward to a real-life money fund that Jagex will donate to charities.

This well is not a water source.

The update history project is a work-in-progress – not all updates to this topic may be covered below. See here for how to help out!
Retrieved from ‘https://runescape.wiki/w/Well?oldid=34810511’
Categories:
Hidden categories: