From the RuneScape Wiki, the wiki for all things RuneScape
Jump to: navigation, search
The Old School RuneScape Wiki also has an article on: osrsw:Weeds
This article is about the farming item. For other uses, see Weed (disambiguation).
Weeds? (edit)

Weeds will grow in any patch that does not have anything else growing in it, even if the soil has been treated with compost or supercompost. Weeds grow every 5 minutes.

Players can harvest them by using a rake on a Farming patch that has weeds growing in it. Doing so will yield up to three weeds per patch, giving 4 Farming experience each.

A fast way to obtain weeds is by raking the flax patch in Miscellania. However, you can only do this until the player's popularity reaches 100% (You can kill citizens to lower it again).

Weeds are generally used to make compost. Players can put up to 15 weeds at a time into a Compost Bin, close the lid, and leave the contents to rot. This will take around an hour, after which they can open the lid and retrieve their compost. Weeds are the fastest item to make compost with, because when you use a weed on the compost bin, it will put all 15 weeds at once. This doesn't change the time it takes for it to turn into compost.

Weeds are also needed in the Rat Catchers quest.

Upon completion of the A Fairy Tale III - Battle at Ork's Rift quest, patches may no longer need to be weeded. Talk to any farmer or gardener to activate this effect. 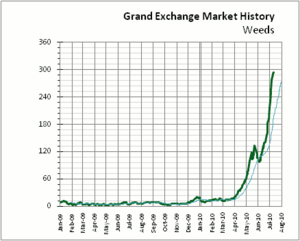 The price climb before it was removed.