From the RuneScape Wiki, the wiki for all things RuneScape
< Weapon
Jump to: navigation, search 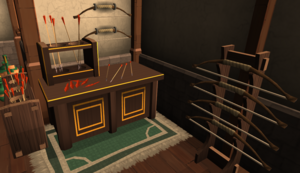 Ranged weapons can be divided into three categories by the type of ammunition they use, which each have monsters that are weak to them. They are: arrows, bolts and thrown.

Bows are ranged weapons which require arrows as ammunition. All bows are two handed weapons. They can be separated into two categories: shortbows, and shieldbows.

Shortbows require two hands to wield and arrows as ammunition. Unlike shieldbows, shortbows offer no armour or life bonuses. However, they do have higher base damage and faster rate of fire (3 seconds between shots). Range: 7 squares.

The following bows are similar to shortbows but have an attack range of 9 squares.

Shieldbows require two hands to wield and arrows as ammunition. They have lower base damage than shortbows and speed (3.6 seconds between shots) than shortbows. However, they offer armour and life bonuses, as well as the option to use defensive abilities requiring a shield be equipped. Range: 8 squares.

Arrows are used for ammunition with bows. They do not affect accuracy, but do add damage bonuses. A higher level arrow adds more damage but can make ranged combat very expensive. The type of bow wielded may limit the amount of damage that arrows add. For example, if a tier 50 bow is used with tier 60 arrows, the damage added by the arrows will not be tier 60 but rather tier 50 (i.e. the level of the bow). Non-members cannot use Saradomin, Guthix, Zamorak, Dragon, Dark or Araxyte arrows. All arrows except for the God arrows and Araxyte arrows can be fletched by members.

Ogre and brutal arrows are only available to members and can only be used with ogre bows. Ogre arrows can be fletched during and after the Big Chompy Bird Hunting quest and can be used with either an ogre bow or a composite ogre bow.

Brutal arrows can be fletched after completing the Zogre Flesh Eaters quest and can only be used with a composite ogre bow. They are currently the only effective weapon against Zogres and Skogres.

Crossbows are ranged weapons which require bolts as ammunition. They can be separated into two categories: crossbows and two-handed crossbows.

Bolts are used for ammunition with crossbows. They do not affect accuracy, but do add damage bonuses. A higher level bolt adds more damage but can make ranged combat very expensive.  The type of crossbow wielded may limit the amount of damage that bolts add. For example, if a tier 70 crossbow is used with tier 80 bolts, the damage added by the bolts will not be tier 80 but rather tier 70 (i.e. the level of the crossbow). Gem tipped bolts can be enchanted using the Enchant Crossbow Bolt spell.

Each time a player uses their grapple, there is a chance that it can break. It cannot be repaired, meaning if a player's grapple does break, they will need to make a new one. Shortcuts that require grapples also require Ranged, Strength, and Agility levels.

Darts can be made after completing the Tourist Trap quest. Players can smith 50 dart tips per bar and can then attach feathers to create a completed dart. They can be wielded as a weapon, allowing players to also carry a shield or off-hand weapon. Note that black darts are only available as drops from elite dark rangers. Darts are stackable, however, they cannot be thrown as far as a player with a bow. The setback is minor, given its decent striking power, speed and availability. Thus, making it a popular training weapon in the ranging arsenal.

Javelins can be bought from the Grand Exchange, Ranging Guild, Void Knights Outposts Archery Shoppe, or obtained from monster drops. They can be wielded as a weapon, allowing players to also wield a shield or off-hand weapon.

Javelins are much slower than other thrown weapons, but they do more damage per hit.

Throwing axes can be smithed in sets of 25 per bar, purchased from the Ranging Guild, or bought from other players. They can be wielded as a single-handed weapon, allowing players to also wield a shield or off-hand weapon. Note that Morrigan's axe can only be obtained as a drop from Revenants.

Throwing axes are slightly slower than throwing knives and darts, but do more damage per hit.

Throwing knives are similar to darts. They are one of the fastest weapon types in the game and can be smithed. They can be wielded as a single-handed weapon, allowing players to wield a shield or off-hand weapon.

Players receive 25 throwing knives from each bar they smith. Throwing knives are stackable, however, they cannot be thrown as far as a player with a bow. The setback is minor, given its decent striking power, speed and availability (thus making it a popular training weapon in the ranging arsenal).

The shadow glaives are degradable Ranged weapons dropped by Gregorovic in the Heart of Gielinor. Each has the accuracy of a tier 90 weapon, but the damage of a tier 80 weapon. They do not require any ammunition to use. The glaives can be bought from other players by trading or through use of the Grand Exchange.

Chinchompas are a unique, stackable, one-time use ranged explosion weapon. A Chinchompa explosion damages all targets within a three by three area. Chinchompas are obtained by box trapping. Mechanised chinchompas can be made using the Invention skill.

Toktz-Xil-Ul is the TzHaar name for obsidian throwing rings.

Obsidian throwing rings can be obtained by buying from the TzHaar combat store, as a drop from the creatures in TzHaar, or by buying it from another player. They cost around 350 Tokkul per throwing ring. This weapon cannot be made using the Smithing skill.

The blowpipes are Ranged weapons dropped from Dinosaurs on Anachronia. They do not use ammo. The Upgraded bone blowpipe is made by combining a Bone blowpipe, Blowpipe fins, Blowpipe feather and Blowpipe chitin at level 87 crafting.

Members also have access to different kinds of weapons. They are: 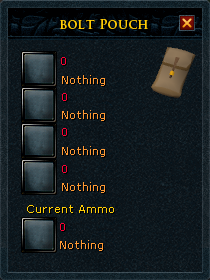 The bolt pouch menu when left-clicked

Although not a weapon, members have access to a bolt pouch, allowing them to carry a variety of bolts without occupying too much of their bank or inventory space. They can be purchased from the crossbow sales dwarf in Keldagrim. Each player is restricted to one bolt pouch at a time. Destroying it or losing it upon death will cause all the bolts in the pouch to be dropped on the ground.

This information has been compiled as part of the update history project. Some updates may not be included - see here for how to help out!
Retrieved from ‘https://runescape.wiki/w/Weapon/Ranged_weapons?oldid=35615751’
Categories:
Hidden categories: