Waterfall Quest is an intermediate quest about the legendary treasure hidden somewhere in the Baxtorian Falls, but soon comes to focus on the history of King Baxtorian himself.

Investigate the death of elven leaders of old. Search for the elf King Baxtorian's tomb and discover the mysterious hidden treasure of the waterfall.

Hudon, Almera's son, by the river.

Start out by speaking to Almera in her house, upstream along the Baxtorian Falls. It is south of the Barbarian Outpost, which can be teleported to with the games necklace. Distressed, she tells you about her son Hudon, who is looking for a hidden treasure in the river.

She requests that you check on him by using the log raft just outside the house. You can also fix the ruined rope rack near the shore for later use.

Exit Almera's house through the west door and board the log raft. You'll crash into a small island, just across the shore where Hudon is standing. You instantly insist that he should go back to his mother, but he refuses to leave until he finds the treasure. Ask if you can help and he'll reject your offer, getting paranoid of you stealing his treasure.

With no arguments left, go south and swim down the river. Head north of where you wash up, to the Tourist Information Centre. Talk to the guide, Hadley, to learn the detailed history of the Baxtorian Falls. Next, go upstairs and search the bookcases to find a Book on Baxtorian.

You must read the book before you can progress in the quest. You discover that the area was originally inhabited by elven colonies, led by King Baxtorian and his wife, Glarial. During his long reign, Baxtorian is said to have hid valuable treasures under the nearby falls, granting access only to himself and his wife. You also learn that Glarial's pebble, the key to open Glarial's tomb, can be found under the Tree Gnome Village. 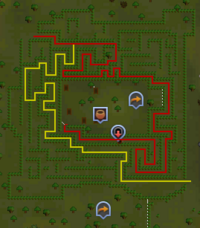 To reach the village, either use spirit trees or, if you have started the Tree Gnome Village (Quest) quest, reach the gnome Elkoy using the Yanille lodestone or the gnome glider, and 'follow' him outside the maze. Walk to the Gnome Village Dungeon ladder entrance (marked with the

icon on the map) located just outside the central area. If you have not started Tree Gnome Village then you will have to navigate through the maze; use the map as a guide. It is suggested to enter the maze from the northwest and follow the red route as it is shorter. The minimap does not allow you to directly path to the dungeon entrance. Instead, click the little spiral immediately southeast of the entrance, and then it is a short distance to the entrance. The only aggressive monsters are level 7 giant rats on this route.

Lower-levelled players should beware of the aggressive zombies (level 12 and 29), giant bats (level 44) and hobgoblins (level 28) in the dungeon. Once inside, go to the northeast room with zombies and giant bats, search the crate that is slightly darker than the rest to receive a key.

Head to the northwest part of the dungeon to find a gnome named Golrie locked in a room, protecting himself from the hobgoblins. Use the key on the gate and then speak to Golrie, who is willing to exchange his escape for Glarial's pebble, which he refers to as just "some elven junk". He will take your key, but it is not required to exit the room.

Glarial's Tomb is to the south-east of Baxtorian Falls, however, you will not be able to enter with weapons, armour, or runes, as it is a sacred burial place which is not to be disturbed or tainted by combat equipment.

Go to a bank – the recommended option would be to use the bank chest at the Barbarian Outpost – and deposit everything except Glarial's pebble. Summoning familiars and prayers also cannot be used inside the tomb. Low level players may want to bring food as there are aggressive zombies and skeletons inside.

Go a bit south-east of Baxtorian Falls to find the entrance to Glarial's tombstone – inside a large greystone area. Use the Glarial's pebble on it to enter.

First, go west and search the chest to receive Glarial's amulet. The amulet is required to enter the Waterfall Dungeon, but it will be used up later in the quest, so you should use the drop trick to obtain another and be able to enter the dungeon after the quest is completed. You will need the amulet for the quest Roving Elves, along with Glarial's pebble.

After searching the chest, search Glarial's tomb in the southern room to receive Glarial's urn. Make sure you have the amulet and urn, and either teleport out or head back up the ladder to exit.

Behind the waterfall[edit | edit source]

Go back to Almera's house and board the log raft.

You will crash, yet again; walk south to the edge of the island and use your rope on the rock on the small island directly to the south, as the current is too strong to swim across.

Next, use the rope on the dead tree. Do not climb the dead tree or use the barrel as you'll end up in the river.

When you reach the doors at the waterfall ledge, make sure that you have Glarial's amulet either in your inventory or equipped, and enter through the door.

Take the eastern passage, and beware of aggressive level 19 Skeleton Mages and level 58 giant skeletons. Search the crate (the northernmost one, with two stacked on top of each other) for A key (a different item from the previous key despite the same name).

Next, head into the western passage and past the fire giants, and use the key on the couple of doors that follow.

The Chalice of Eternity.

Past the doors is Baxtorian's tomb, where you'll find six pillars, two statues, and the Chalice of Eternity floating in the air. Use an air rune, a water rune, and an earth rune on each of the six pillars, noted by a burst of smoke for each rune and a message in the chatbox. Finally, use Glarial's amulet on the statue of Glarial and the ground will rise beneath the chalice, but do not take the Chalice. Use your Glarial's Urn on the Chalice, allowing you to take the chalice.(if you try to do so before the runes are placed you will be flooded out). 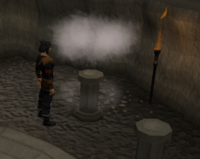 Placing a rune on a pillar.

If you try to take the chalice before you use the urn on it, you will also be flooded out.

You will automatically take the reward from the chalice and finish. However, if your inventory is full, you will need to clear out 5 inventory spaces and use the urn on the chalice again. 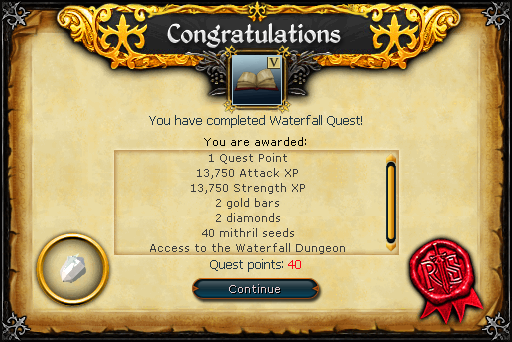 Waterfall Quest is directly required for the following quests/miniquests: