From the RuneScape Wiki, the wiki for all things RuneScape
Jump to navigation Jump to search
The Old School RuneScape Wiki also has an article on: osrsw:Water altar
Water altarWater ruins? (edit)? (edit) 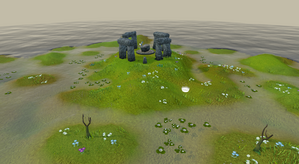 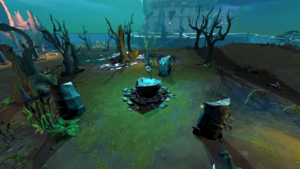 The Water altar may be found in the Lumbridge Swamp. It is used to craft water runes from rune essence or pure essence, providing 6 Runecrafting experience.

As with most other runecrafting altars, it can be accessed via the Abyss, found north of Edgeville Wilderness. Players could also enter its ruins by using a water talisman, an elemental talisman, or an omni-talisman. Players could also simply click on the ruins while wearing a water tiara, omni-tiara, a wicked hood imbued with any of the above, an omni-talisman staff, a water talisman staff, or an Enchanted water tiara.

The fastest way to get there is to used the wicked hood's teleport, which could only be used twice, or 3 times if all the wicked robes have been purchased from the Runespan. The second fastest way is to break a water altar teleport tablet, but that requires playing Great Orb Project. Both of these methods teleport the player just outside of the altar. The Zamorakian token teleports the player a short distance northeast of the altar, but it could only be used 10 times per day.

After completing the quest Evil Dave's Big Day Out, players can chip a Lumbridge teleport tablet by using Dave's spellbook on it, this action will turn it into a 'Chipped' Lumbridge teleport. Using it will teleport players south of the Lumbridge Crater, very close to the water altar.

However, for crafting water runes, teleports are not very necessary as the water altar is very close to two banks: one to the south at Shattered Worlds (members only), and one to the northeast in the Lumbridge Crater. While the former looks closer on the map, due to terrain blocking, it is actually marginally slower than the latter.

The maximum likely limit for crafting Water runes in one visit is 1,518. This would be achieved by having 95 Runecrafting, giving a 6x bonus, and carrying 253 essence to craft (23 in the normal inventory along with 48 in the 5 sizes of Runecrafting pouches, along with 175 claimed from the wicked hood (if all the wicked robes have been purchased, and 7 from any abyssal Summoning creature), whilst wearing an explorer's ring (which has a 1 in 10 chance of producing an extra rune per essence). The maximum possible experience is 3,036 obtained doing the above while wearing water runecrafting gloves.

It is possible to make mist runes, mud runes, and steam runes while at this altar, but at a 50% success rate. This will result in fewer runes than normal being made. To make a combination rune, the player needs one set of elemental runes, a stack of pure essence, and 2 talismans.

A water tiara may be created at this altar by having a water talisman and a normal tiara in your inventory. The player must use the tiara on the altar. Doing so will earn 30 Runecrafting experience.