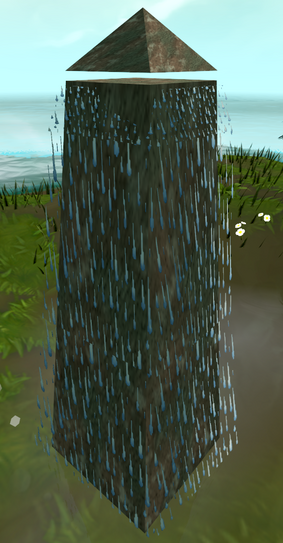 The Obelisk of Water is located on an island off the shore of Catherby. It can be reached by climbing the ladder near the black dragons in Taverley Dungeon. Players may grapple from the island to Catherby although they can't go the other way.

The obelisk is used to charge an unpowered orb into a water orb using the Charge Water Orb spell (with level 56 Magic, 3 cosmic runes and 30 water runes). A staff of water, or another staff that gives free water runes, is recommended to save on runes. A water orb is needed to craft a water battlestaff. Water orbs are also used in Summoning when making hydra pouches.

Players may get to the obelisk through the Taverley Dungeon.

An effective route for charging multiple orbs is to bank in Catherby, grapple over White Wolf Mountain and head south to Taverley dungeon. Upon navigating the dungeon reaching the obelisk, the player can then charge, bank and repeat as required. This method requires a mithril grapple and a mithril crossbow or higher, 39 Ranged, 36 Agility and 35 Strength. Level 70 or 80 Agility is very helpful for navigating Taverley dungeon more quickly. Players with 99 Dungeoneering can also use the mastery cape perk and teleport to the Taverley hellhound resource dungeon near the ladder leading to the island.

The update history project is a work-in-progress – not all updates to this topic may be covered below. See here for how to help out!
Retrieved from ‘https://runescape.wiki/w/Obelisk_of_Water?oldid=34713675’
Categories:
Hidden categories: