Water in RuneScape is a very versatile fluid that is used in a number of skills, particularly Herblore, Crafting, Farming, Cooking, and Construction.

The use of water in game almost always requires a vessel to hold the water. Examples of common vessels include buckets, vials, waterskins, bowls, and jugs. Players can easily obtain water by using any of these vessels on a water source. Common water sources include sinks, water barrels, waterpumps, fountains and wells. Members can build their own plumbed-in water source in the kitchen of their house. It is worth noting that in RuneScape, players cannot obtain water from bodies of water like lakes or rivers.

Sources of water close to a bank include the water pump north of the west bank in Falador and the cooking guild once its bank has been unlocked. Alternatively the Humidify spell can be used. 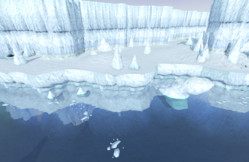 The shore of the iceberg in DirectX mode.

The graphics for bodies of water has drastically changed over the life of RuneScape. Progress in game engine design has allowed for water to go from a static and fuzzy blue-white texture to a deep transparent blue complete with waves and light reflection effects.

Bodies of water first started to have a more realistic look shown in trailers for the game along with teaser images given out for past game updates, at the time of these teasers and trailers though, the realisitic water effects were impossible to access in the game. The water has small waves which flow back and forth, the water shown in these trailers and images could not be seen anywhere in the game, however a recent update has changed this. The first time that this new look for water was spotted was in the trailer advertising the Dungeoneering skill prior to its release, this trailer also showed some graphical effects still not present in the game. On the 25th October, 2011 the water was updated only on the DirectX mode (the new water effects are NOT available with OpenGL). It appears to still be in development, as the edges of the water do not line up with the shore.