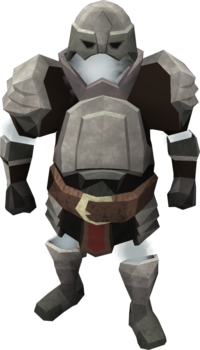 A warrior ancestor is a dwarf that wasn't able to get to the afterlife because they weren't buried with burial armour. They come to the workshop as spirits inhabiting the armour on the walls. By destroying the armour they will pass on.

When a player defeats these enemies they receive 0.10% respect for killing them.

If the armour isn't killed after a few minutes, it will perform a flourish, then crumble to pieces.

It is not recommended to spend time killing these, since one does not get sufficient respect percentages when killing them for the time taken, despite the fight being very quick. It is best to simply ignore them, and continue making armour or swords.