Warpriest of Zamorak armour is a set of hybrid armour originally obtained during the Battle of Lumbridge world event at a cost of 20,500 renown. Members can now receive parts of the armour by killing Zamorakian followers in the God Wars Dungeon. It could also be bought during the Tuska Comes world event.

The armour's set effect has a chance to reduce damage by (90 + pieces of armour worn)%. Wearing at least 3 pieces is required to gain this set effect, similar to how the other warpriest armour sets function. A mix of Zamorak and Saradomin warpriest armour pieces can be worn contribute to the set effect. When the effect activates, a divine shield appears in front of you, and the following message appears in the chat box: Zamorak's blessing reduces the damage of this attack by <AMOUNT>. 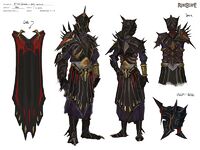