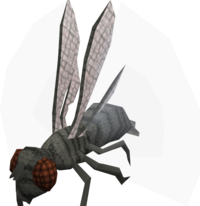 Warped flies can be found in the third room of the Lumbridge Catacombs which can only be entered after completing The Blood Pact quest. They were created by Dragith Nurn, a now undead necromancer, during his experiments with local animals.

This is one of the monsters that drop Mask part 2, which can be used with the 4 other parts to create the Mask of Dragith Nurn.

Warped flies can also spawn in the Nemi Forest on Mazcab. These flies, however, scale to the player's level and do not drop anything.