From the RuneScape Wiki, the wiki for all things RuneScape
(Redirected from Warforge)
Jump to: navigation, search

Warforge Dig Site is a dig site that players can visit when they reach level 76 Archaeology. Upon reaching the required level, a Warforge invitation is given, directing the player to the dig site.

Warforge was previously an underground Bandosian military institution in Feldip Hills. Bandos used the facility both to train goblins, with the other races acting as instructors, such as hobgoblins, ourgs, orks and ogres. The goblins were pitted in brutal games, both for Bandos' own amusement and a source of income for his armies, as he would sell the surviving goblins to other parties as mercenaries.

These goblins were the source of many discussions about Third Age military, and many wondered how these goblins were well trained and equipped, as present day goblins are known to be disorganized and poorly armed. It was soon revealed that Bandos' goblins had kidnapped Thalmund, an Imcando dwarf, who was forced to make weapons for the Bandosians. Thalmund's work culminated in the creation of his forge and warforged bronze, which was said to be superior than some forms of steel used by the other factions during the time.

Following the end of the God Wars, Bandos destroyed the facility, with his armies still inside so no one else could claim them, shortly before he was banished at the end of the God Wars. Many were killed, although a few were able to escape to the surface; those who escaped never spoke of the events again. Those who were stuck inside soon entered a period known as the Forge Wars, fighting in the belief that this was Bandos' final game and that he would come and rescue the victors. Any hobgoblin, ogre, ork and ourg instructors still inside were likely killed by the goblins due to their overwhelming numbers.[1]

This is where Bandos watched fights for his own entertainment. There are two sets of crucible stands debris in the Warforge - Crucible stands excavation site, along with three gladiatorial goblin remains in the Warforge - Crucible arena excavation site. The entrance to the tunnels is underneath the throne, but the barricade must be excavated away (with level 83 Archaeology) prior to accessing the entrance. 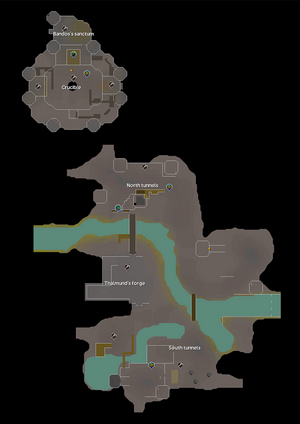 A river divides the tunnels in half; players may cross over using the bridges found in the area. The river contains two fishing areas; one by the nearby bridge which contains eels, and another further northwest which contains cavefish. A materials box is found floating near the cavefish shoals.

This area contains the goblin dorm debris, Kyzaj champion's boudoir and Yubiusk animal pens, along with four vulcanised rubber caches, albeit scattered across the area.

The northern tunnels contains another tunnel which may be visited with a Thorobshuun battle standard to obtain a red hand cave painting. There are scattered caches of mark of the Kyzaj, warforged bronze and malachite green in this area.

There is also another door leading to Thalmund's forge here, where players begin the Into the Forge mystery.

Created by the Imcando master smith Thalmund, it is where he created his weapons. Thalmund's forge is an area where players may smith once the forge is reactivated again. A second lever near the southern door may be activated to open them, allowing access from both directions.

In a small alcove contains an imcando furnance and mattock; this is where players create the imcando mattock. The area also contains inactive charyou seeds which may be heated with flame gloves to create the Always Adze relic.

Near the lever is another hand of glory. 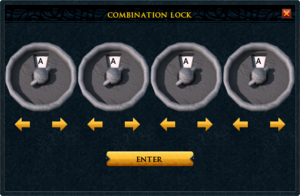 There are two locked chests within the Warforge, the first is located in the northern part of the underground area (requiring 83 Archaeology (81 with a tea)) near the Big High War God shrine that can be unlocked and inspected for 50 malachite green and 50 vulcanised rubber materials.

The second is located in the crucible area, behind Bandos' throne (requiring 100 Archaeology, which cannot be boosted). It can be unlocked and inspected for 50 Marks of the Kyzaj and 50 warforged bronze.