From the RuneScape Wiki, the wiki for all things RuneScape
Jump to navigation Jump to search
This article is about the personification of war. For wars and historical battles, see Wars.
War? (edit)? (edit)

According to Death, War hungers for battle at every moment, and the two of them together were once a force to be reckoned with. War himself claims that he is probably closer to Death than any of the other riders, and that he used to keep Death busy with a torrent of souls back during his days of war and mass slaughter.

At some point long ago, he gave up war and retired as a rider to be with his love Peace, but their relationship ultimately didn't work out due to their contrasting natures. Nevertheless, he remains retired to this day, but he still keeps in contact with his fellow riders. In his retirement, he has apparently taken up long walks on the beach, and according to Beauty, he also is known to hog his clan citadel's battlefield.

In War's Retreat, War provides a decanting service for both potions and flasks. He also sells rewards in his shop, War's Wares, for Marks of War.

While War did not appear in the event directly, players had to help Beauty select a statue of the demonic warlord K'ril Tsutsaroth to build for him at Death's citadel during Deathcon II. War wanted his statue built on one of the two plinths closest to the clan battlefield. Players were given the hints that his favourite colour is red, and his favourite creatures are demons.

'Til Death Do Us Part[edit | edit source] 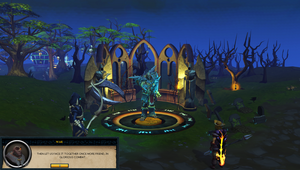 War is summoned by Death.

War first appeared in the second week of the 2018 Hallowe'en event, where Death summoned him to assist in cleansing the chaotic rift. With War's appearance, infernal demons started to occasionally appear and prevent the activity beam from the pillars from increasing. Players had to take War's javelin from a weapon rack beside War and throw them at the demons to defeat them and allow the beam to continue progressing.

Following the 2018 Hallowe'en event, War decided to set up a retreat as a hobby, claiming that everyone needed a hobby after retirement. War found numerous adventurers who were also desiring combat, hence why he constructed the retreat to satisfy their needs. He sent the adventurers to kill in his name, and would reward them for taking down particularly powerful opponents, such as the upgrading of his facilities and boss-essential items such as auras and refreshes.