From the RuneScape Wiki, the wiki for all things RuneScape
Jump to navigation Jump to search
The Old School RuneScape Wiki also has an article on: osrsw:Wanted!
For the achievement, see Wanted! (achievement).

Wanted! is a quest that focuses on the completion of your application to become a Temple Knight. Due to an oversight during your recruitment, you are now to hunt down an extremely dangerous wizard and mass murderer named Solus Dellagar.

A tiny problem with the old dossier[edit | edit source]

Speak with Sir Tiffy Cashien in Falador Park. Ask if he has any jobs for you yet.

He lets you know the White Knights made "a tiny blunder", and that you're not actually permitted to join the Temple Knights if you're not in the order of the White Knights. It turns out you have to work as a squire for five years... or try Sir Tiffy's different solution to the problem.

Tell him you are interested and he will mention a loophole which will let you in, now ask about the Wanted quest, and he will tell you to go see Sir Amik.

Definitely not some kind of elaborate hoax[edit | edit source]

Find Sir Amik (2nd floor[UK]3rd floor[US] of west tower) and talk to him; after a short conversation, he asks you to become a squire. Decline his offer and continue the conversation; Sir Amik tells you that there needs to be a crisis for you to be deputised directly as a White Knight.

If you accept Sir Amik's offer to become a squire, he will ask you to get him an Asgarnian ale. Bringing him one will just cause him to ask for another one. Go report back to Sir Tiffy with what Sir Amik said and he will tell you about a particularly vicious and dangerous criminal. After the conversation with Sir Tiffy, head back to Sir Amik and speak with him about the criminal.

Sir Amik tells you the news that a criminal named Solus Dellagar, the "infamous murderous mage", is back. Continue through this conversation as well, and accept the mission. Sir Amik now makes you a fully deputised White Knight.

A player scanning with the commorb.
Items needed: Either 10,000 coins, or a law rune, enchanted gem and molten glass

Return to Sir Tiffy and speak with him. Your task is to track Dellagar down for a recovery team to capture the evil mage – Tiffy will mention that you need a device called a commorb, which you can either have Tiffy make (by giving him a law rune, enchanted gem, and molten glass), or by giving him 10,000 coins.

Tiffy now asks you to contact your information operative, Savant. You have several options for controlling your commorb:

Contact Savant using the commorb, then ask about current assignment. She tells you that you should investigate the Taverley Dungeon where the Black Knights supposedly are, and that you should also take a look at the Mage of Zamorak that is interested in Runecrafting.

Down in the dungeon[edit | edit source] 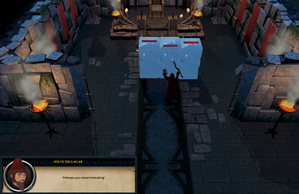 Head into Taverley Dungeon. Make your way to the south-western-most room of the Black Knight's Base to find Lord Daquarius. Talk to him, but he won't help you. Savant advises you not to try to bluff him into giving you something. Once you kill a Black Knight, however, Daquarius will give in, begging you not to kill any more of his men.

Talk to him again, and he tells you that Solus is in a place with a lot of fur that is not bear fur. 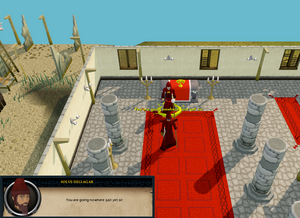 If you have already started the Enter the Abyss miniquest, you may go straight to the Altar of Zamorak in the southeast corner of Varrock. If not, he is located in Edgeville at the end of the river in the Wilderness, where he then directs the player to the Altar of Zamorak. (The Mage of Zamorak will not speak to you without completion of Rune Mysteries.) Before talking to him, take off any worn Saradomin or Guthix items. Grab twenty unnoted rune or pure essence and speak to the Mage of Zamorak.

The Mage of Zamorak offers to trade what he knows about Solus for your commorb, but Savant stops you. He then offers to trade his information for twenty unnoted rune or pure essence. Talk to the mage again, and trade him the essences. He tells you somewhat unhelpfully that Solus is east of the mage. Savant reminds you that Daquarius said Solus is with furry animals of some kind. The adventurer deduces Solus Dellagar is in Canifis.

Items needed: Commorb
Items recommended: Light source, teleports and activated lodestones, combat equipment and food. Take off your Ring of life if you are wearing one, it will not help you and will be destroyed. 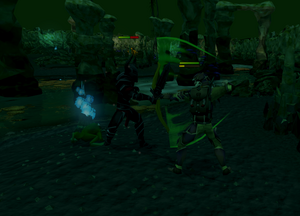 "Say hello to my little friend!"

Now head to Canifis. Once you enter the village of werewolves, Savant contacts you and says she is going to scan for Solus. She tells you a bit about a teleporting experiment and suggests you scan for Solus. (Note: If you exit out of dialogue upon arriving in Canifis, you will have to return to the Mage of Zamorak and begin the conversation again.)

Choose the Scan option with your commorb as you walk around Canifis until you uncover Solus. Solus briefly appears, speaks with you, and disappears. Savant then appears and gives you a clue to Solus's next whereabouts.

From this point on, you'll be chasing Solus throughout Gielinor, and each time you find him you'll receive an item in your inventory. That item is a hint for where to go next. There are a total of seven locations that need to be scanned. Each location is random, except for the Champions' Guild, the Dorgeshuun Mines, and the Rune Essence mine, which are always the third, fifth, and last locations, respectively. Listed below are some items that you may receive during your pursuit of Solus, along with the location the item is a hint for:

These items always appear in a predetermined order.

These items appear in a random order, and vary from player to player.

Solus will also react based on which scan location out of seven you are currently at. 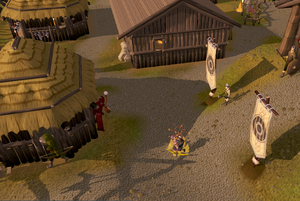 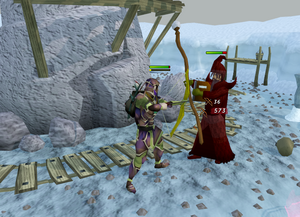 After defeating the Black Knight at the sixth scan location, you will receive 20 noted rune or pure essence. This will point you to the Rune Essence Mine, so head there using whichever method you prefer. Upon entering the mine, you view a cutscene where Savant summons fifteen rangers to attack but Solus Dellagar kills them all with Ice Barrage, dealing 700 damage to each Temple Knight. After that, the cut-scene ends, and Solus is greatly weakened. Finish off Solus Dellagar yourself.

Solus is fairly easy, with no specific combat level, around 3500 life points, and only uses melee due to being weakened. Once he is defeated, you receive his hat in your inventory. Return to Falador, talk to Sir Amik Varze, and hand over Solus's hat. If the hat is lost, speak to Savant to obtain another one. 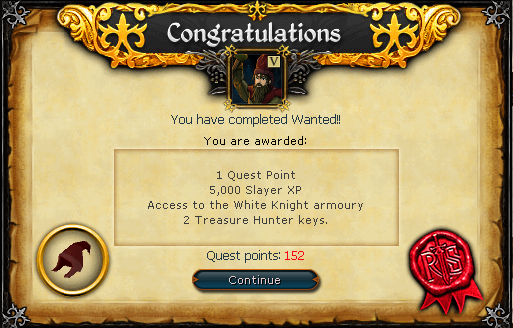 Wanted! is directly required for the following quests/miniquests: