From the RuneScape Wiki, the wiki for all things RuneScape
Jump to navigation Jump to search
This article is about the creature. For the item, see Wandering wyrmwood (item).

Wandering Wyrmwoods can occasionally be found north from Nora T. Hagg's house and just around Sylas' bean patch in south Taverley. This strange living plant often just sits in the ground as Wyrmwood, but sometimes it "gets alive" and start wandering around as Wandering Wyrmwoods. This is the time when players can click on them and receive wandering wyrmwood leaves. This must be done immediately after they start moving, as they return to their immobile form very quickly. The leaves are used during Druidic Ritual quest as an ingredient for Ointment of imbalance. When a player attempts to pick it while not doing the quest, a message appears in the chatbox saying that you have no use for the leaves. 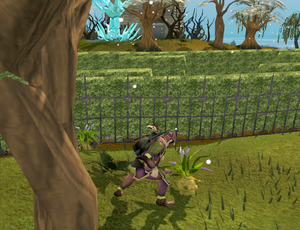 This information has been compiled as part of the update history project. Some updates may not be included - see here for how to help out!
Retrieved from ‘https://runescape.wiki/w/Wandering_Wyrmwood?oldid=35892758’
Categories:
Hidden categories: