From the RuneScape Wiki, the wiki for all things RuneScape
Jump to navigation Jump to search
This article is about the miniquest. For the Ga'al it involves, see TzHaar-Ga'al-Kot.
For the achievement, see Wandering Ga'al (achievement).

Wandering Ga'al is a miniquest that was released in January 2013 as a response on an ongoing hunt to translate the final bookcase in Brink of Extinction, after a Jagex Moderator mistakenly told the players there was a way to read it. The players searched for a little over a month before a solution was finally implemented.[1]

Content developer Mod Stu coded the miniquest in little over an hour, and continuously gave hints towards finding the Ga'al on the forums. The solution was eventually found on 14 May 2013, 6 months after the bookcase was added to the game.[2][3][4] 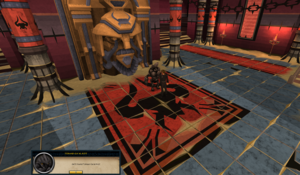 Meeting TzHaar-Ga'al-Kot after all the conditions are met.

TzHaar-Ga'al-Kot can be encountered any time after completing The Brink of Extinction, but only after performing the following steps, which are as follows:

TzHaar-Ga'al-Kot will then appear, thanking you for finding him. Ask him if he's able to read the Ancient TzHaar language, and he will agree to meet you at the bookcase in the Fight Cauldron.