Wally is one of Varrock's most famous heroes. When the powerful demon Delrith attempted to destroy the city, Wally narrowly managed to defeat him with the sword Silverlight in the 19th year of the Fifth Age. He died sometime after, which his son Waldo speculated to have been due to contracting pneumoconiosis during his time working as a miner, and has since been largely forgotten. He is the ancestor of Sir Prysin. The Eulogy for a Forgotten Hero lore story portrays his battle with Delrith.

His helmet, which he is said to have worn when he battled Delrith, is displayed at the Outpost near Ardougne after completion of the Making History quest. 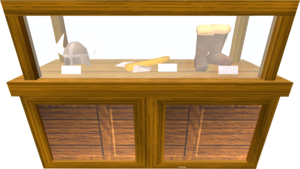