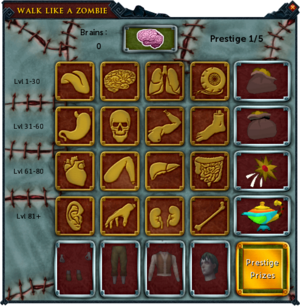 Walk Like a Zombie was a Treasure Hunter promotion that ran from 27 October to 31 October 2016. In it the player has to complete tasks set out on a card, similar to the Death Lotus Training and Zodiac Training promotions. Ironmen are able to do all the tasks in the promotion.

Tasks can be skipped with a brain sticker which consumes the sticker.

Rewards from the event include zombie-themed weapon overrides (a spine bow, bone wand, brain orb and hand flail) and a zombie emote.

Rewards from completing columns or rows of the card include:

The zombie walk animation is automatically unlocked after completing the 5th prestige. The token is a very rare (purple) reward from Treasure Hunter. If the override was unlocked before completing the prestige, another token was rewarded.