From the RuneScape Wiki, the wiki for all things RuneScape
Jump to navigation Jump to search
Waiko islander? (edit)? (edit) 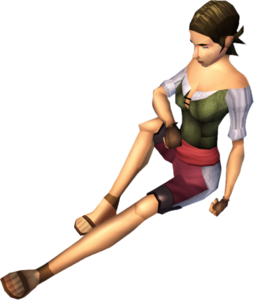 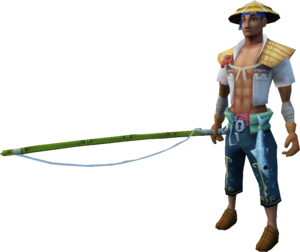 Waiko islanders are residents of Waiko, a small, commerce centred island in the Arc region of the Wushanko Isles in the Eastern Lands. Most cannot be spoken to, as their purpose is purely cosmetic, however, four of them can be pickpocketed at the market area of Waiko with level 86 Thieving, continuing the pickpocket action without need for re-clicking until caught. Each successful pickpocket rewards 40 experience and after you have been caught three times you will not be able to pickpocket them any more for 5 minutes. During this time, their pickpocket option will disappear, leaving only their examine option.

After being caught once the player will receive the message: "You have raised this islander's suspicions. 1 out of 3 strikes." The islander will also say What was that?

After being caught for a second time, the player will receive the message: "The islanders here are starting to notice your sneaky ways. 2 out of 3 strikes. They'll catch you next time." The islander will also say What are you doing?

After being caught for a third and final time, the player will receive the message: "The islanders here are wise to your thieving ways!" The islander will also say You think the islanders of Waiko are so easily fooled? We will be watchful of you, Player. Each time that a player is caught, their chance of getting the next strike increases by roughly 40%.

The player will then be unable to pickpocket the islanders for 5 minutes. Once this time has passed, the player will receive a message saying "Waiko's villagers have forgotten about your pickpocketing."

Chimes obtained from pickpocketting Waiko islanders do not count towards the daily cap for collecting chimes.

This information has been compiled as part of the update history project. Some updates may not be included - see here for how to help out!
Retrieved from ‘https://runescape.wiki/w/Waiko_islander?oldid=35868130’
Categories:
Hidden categories: