From the RuneScape Wiki, the wiki for all things RuneScape
< Vyrewatch
Jump to: navigation, search

Vyrelords/Vyreladies are high ranking vampyres found in the upper tier area of Darkmeyer. They're aggressive, unless you are wearing the full Darkmeyer or House Drakan outfit (a combination of both works). They can be fought and killed to get combat, firemaking, and prayer exp as well as being able to make a profit.

A great area to kill these monsters is near the altar located west of the Darkmeyer bank which allows you to use prayers whilst they aggressively swarm you. There are two Vyre spawns right behind the tree - this is the best location to kill them effectively without the Soul Split curse.

If Soul Split is unavailable, it is instead recommended to use food or a healing familiar such as bunyip or better.

The Protect From Magic prayer and the Devotion ability are very useful in negating damage.

If Soul Split is unlocked, the most effective location to kill Vyres is near a large tree south-southwest of the bank. As many as six vyrelords can attack at the same time, causing rapid damage that cannot be sustained without Soul Split.

While any style can technically be used for killing vyres (as the Sunspear can change combat styles), melee is the best when using Soul Split, due to its array of high-damage AoE abilities.

After an update a vyrewatch may become stuck behind Vanescula Drakan, to fix this run underneath her a few times and she will no longer count as an NPC block.

Where to stand if you have Soul Split. 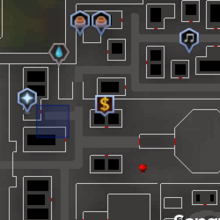 Where to stand if you don't have Soul Split.

They are good for training due to the increased hits provided by the use of blisterwood weapons, all of which hit very high on them. The sunspear combined with a strong off-hand weapon (e.g. drygores, enhanced excalibur, Off-hand blisterwood sickle - in legacy mode, only sickle is effective) is the most effective, given its higher bonuses and passive effect of auto-cremation.

Using the Sunspear (magic) can give 250,000 or more experience per hour. Abilities such as asphyxiate will kill vyres extremely quickly, and Metamorphosis or Sunshine to help speed up kills in general.

Using the Sunspear (ranged) and Holy overload potion (6) potions to kill the vyrelords can give upwards of 160,000 experience per hour. An alternative is to use the altar as it can easily be accessed, one can stay here for a very long time by using the Soul Split curse to heal from the high ability hits, restoring prayer points at the altar as necessary. Using Death's Swiftness can give easy kills in a few abilities.