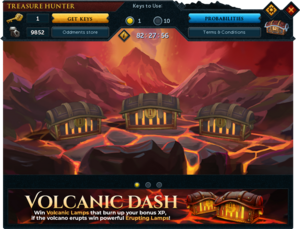 Volcanic Dash is a Treasure Hunter promotion that was first introduced on 7 October 2021. It is similar to the Smouldering Volcano promotion which also features the volcanic and erupting lamps. The difference being that while opening chests, there is a chance for the volcano to erupt which replaces all volcanic lamps with erupting lamps for the next four or ten chests.