The Void leech is an escaped pest that the player is sent to track along with Commander Korasi and Jessika during the A Void Dance quest. The Kinshra, it turns out, are using its "leeching" power; the leech excretes a kind of "foodgoo" as it burrows, which saps the life energy out of any living thing nearby other than pests. The Kinshra take advantage of its ability, using a Kharidian salesman named Ali Tist to sell unopenable boxes made out of Waxwood (a waterproof, ugly type of wood) full of the goo the Void leech leaves behind to unsuspecting customers in an attempt to take over Falador. The player finds the Void leech at the end of the quest, and is given the option to either set the pest free (where it will live out the remainder of its days away from people in a remote location), or put it out of its misery by killing it. 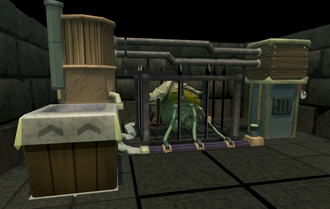 The captive pest in the Black Knight Workshop

This information has been compiled as part of the update history project. Some updates may not be included - see here for how to help out!
Retrieved from ‘https://runescape.wiki/w/Void_leech?oldid=35583677’
Categories:
Hidden categories: