The void knight mace is a wand that can be bought from a Void Knight for 250 commendation points, although a player must have level 42 Attack, Strength, Defence, Constitution, Ranged, and Magic, along with 22 Prayer.

Despite this item being called a mace, it is classified as a wand and cannot be used to deal melee damage. However, when placed in a keepsake box, it overrides as a main-hand melee weapon. 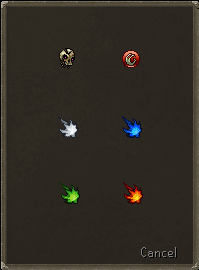