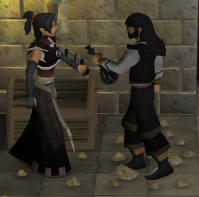 The potion being handed over to the player

The Void Knights' Potion is a potion developed by the Void Knights which allows one to access the mind of the previous drinker of the potion. Its development started around year 169, when it was finished. The potion has been used twice so far, once on the scientist Jessika to discover the truth and once on Commander Korasi to uncover a locked away memory during Quiet Before the Swarm.

After drinking the potion, one will be transported into the mind of another where they will be confronted with a puzzle of some sort, which has to be solved. After solving it, the memory will be unlocked.