From the RuneScape Wiki, the wiki for all things RuneScape
Jump to navigation Jump to search
The Old School RuneScape Wiki also has an article on: osrsw:Void Knight
This article is about the NPC. For other uses, see Void Knight (disambiguation).
Void KnightVoid Knight (medium farm requester)? (edit) 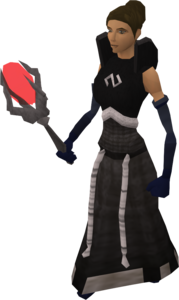 A Void Knight may occasionally appear at Manor Farm, asking for help with a medium Farming Guild request.

A Void Knight dies during a game of Pest Control.