From the RuneScape Wiki, the wiki for all things RuneScape
Jump to: navigation, search
This article is about the monster. For the pet, see Vitalis (pet). 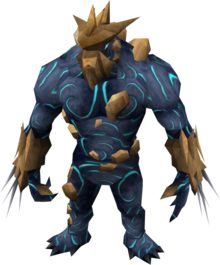 Vitali are monsters that are summoned by Vorago, starting on the week of 11 July 2013.

Before they are summoned, Vorago will charge and unleash an orb towards either the north, northeast, or east if he stands in the centre of the room. At least five players must cover the orb's spot to prevent any vitali from spawning. Each player who was on the orb will take 2000 damage (this can be reduced with the arcane, elysian, divine spirit shields or abilities). The damage will be fully negated if the player uses Resonance.

Each orb Vorago unleashes carries 5 vitali. This number is reduced by one for each player that was on the orb when it explodes. Up to 15 (25 in hard mode) vitali can be in the arena in any one time. It is highly advised to play on low detail to see the orbs clearly. In hard mode, eight vitali will spawn for each orb rather than five, and the damage from blocking it increases to 3000.

Vitali attack with rapid melee attacks and can run as fast as the player. Most importantly, they block the player's line of sight, interrupting combo abilities such as Asphyxiate if they move in the way between the player and Vorago, a stone clone or other vitali.