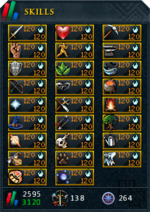 Although there is no content to unlock between levels 99 and 120 in any skill other than Dungeoneering, Invention, Slayer, Herblore, Farming and Archaeology players will still receive level up messages from other skills with this feature enabled. Players have the ability to set icons that will be displayed on a specific skill when it reaches the virtual level equivalent of level 120, and when the skill reaches 200 million experience.

To enable virtual levelling, players can find the feature in Game Settings under the Skills side menu of Gameplay tab in the Experience options.

For non-elite skills the following experience is required for virtual levels 100-120.

For non-elite skills, virtual levels beyond 120 do not exist but can be calculated as follows.

Elite skills naturally have true skill mastery at level 120 and follow a more linear experience curve. Virtual levels 121-150 can be calculated as follows.

This information has been compiled as part of the update history project. Some updates may not be included - see here for how to help out!
Retrieved from ‘https://runescape.wiki/w/Virtual_levelling?oldid=35040107’
Categories:
Hidden categories: