Violet is Blue Too

From the RuneScape Wiki, the wiki for all things RuneScape
Jump to navigation Jump to search
For the achievement, see Violet is Blue Too (achievement).

Violet is Blue Too is a quest that is a sequel to Violet is Blue. It continues the story of six-and-a-half-year old orphan Violet who has been raised by yeti parents, Betty and Trevor. During the quest, Violet and the player team up to find the snow imp (who has gone missing) in charge of creating the festivities for Christmas in the Land of Snow. Once found, the distraught snow imp is concerned about not being rehired by Santa Claus to decorate Yeti Town next year. With only two days left to go until Christmas, it is up to the player and Violet to save the festive holiday.

To begin the quest, talk to Postie Pete at the base of White Wolf Mountain (Taverley side outside of the portal to Yeti Town) and accept the prompt.

Enter the Land of Snow portal and talk to Posty, just in front of the portal and a cutscene will start. Walk north up the hill and it will transport you to Violet's house on the hill. Knock on the door and Violet will come and answer the door. Then talk to Violet in her room, north-west of Betty and Trevor. Violet will then proceed to give you clues for the location of the map. 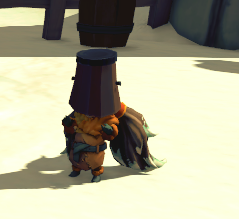 After you search the barrel Violet will find coal and a carrot instead of her map. She will then talk about the Snowman King who must have stolen it from her. Exit the house and talk to Violet. She will ask you to close your eyes and not peek. You will hear different noises and you will be given the option to peek or keep your eyes closed. Once Violet is finished, you will open your eyes to see two talking snowmen standing by the gate. Violet will "attack" the snowmen revealing them as snow imps. Talk to the snow imps to ask about the missing named snow imp (his first name will vary for different players). Walk down the path away from the house to the south to go to the abandoned farm. Check the chest in the southern fenced-in area to find the missing snow imp. Pick the third chat option to continue the quest. After the cutscene you will be in the middle of Yeti Town where the tree is burning.

You can choose which of the three objectives below you want to do. The order does not matter.

Talk to Assistant Brad (the snow imp north-east) about getting a new tree. He will tell you to go to Taylor on the tree farm to get a new tree. Go north past the bridge, then west to the farm and talk to the yeti Taylor. In the most western part of the tree farm up on the mound click "Wonky Tree". Violet wants this one and Taylor will cut it down and put it in the centre of town for you. Talk to Assistant Brad to complete this task.

Talk to Assistant Susi (the snow imp south-east) to help decorate the town. You'll need 4 piles of Christmas decorations. Do this by knocking on doors and asking residents of the town if they have any to spare. The locations for the houses for each are listed below:

Once done with all above objectives, talk to the named snow imp. He will want you to decorate the tree. Click on the "wonky tree". Violet will tell you that you'll need snow implings to help out to be able to reach the tree. Talk to Hal the snow impling who is wandering around south-west of the tree in the centre of town. After the dialogue the next objective begins.

Go to the top of the south hill right outside of the house's doorway and click on the snow impling in your backpack to "launch". Do this 3 times total to finish decorating the tree. When done click on the tree with the option "admire wonky tree", then a cutscene will begin. After the cutscene talk to the named snow imp to view another cutscene of returning Violet home. Go inside the house and talk to either Betty or Trevor to complete quest. 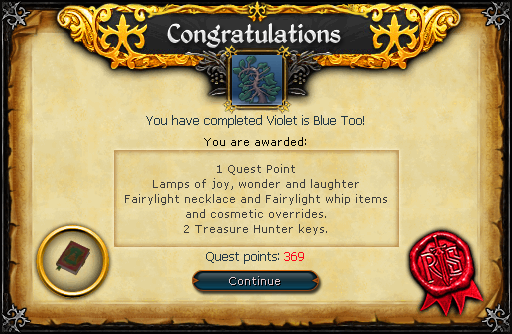