Getting to the minigame[edit | edit source]

At any farming patch with a Tool Leprechaun (except at Harmony Island, the Wilderness Herb Patch, or Trollheim), right-click them and choose the "Talk to" option. Proceed through the dialogue, and select the second option ("Winkin's Farm"). Next, select the option "Can you take me to Winkin's Farm?", to which the leprechaun responds by saying "avach nimporto" which teleports the player to the minigame site. There is a portal north-east of the farmhouse to return to the patch. Familiars and pets cannot be brought into the minigame.

To start, speak to Farmer Blinkin or Mrs. Winkin, who will give you 10 free flags and tell you how to play the game. You can have a maximum of only 10 flags.

The game involves a grid of holes. After digging at a hole with a spade a number will appear at the digging location. The number indicates the number of adjacent squares that hold a seed. The numbers range from zero to seven. (0 is invisible, 1 is blue, 2 is green, 3 is red, 4 is yellow, 5 is purple, 6 is teal, 7 is very light brown.)

In case of a zero, the minigame will show an empty area if the edge of the empty area is close enough the numbers on the edge will be displayed instantly too. Digging at a location that carries a seed, destroys the seed, in form of a Potato seed.

After locating a square with a seed indicate the location by planting a flag. A farmer will retrieve the seed and give points as a reward. If the indicated location does not carry a seed, the flag will be lost and the number of points is reduced.

Once you have used your 10 flags, you will need to retrieve them from Farmer Blinkin or Mrs. Winkin, who will also offer to replace any you have lost for 500 coins each. Mrs. Winkin will also sell them for 50 points.

After planting a flag, rabbits will race the farmers to the indicated spot. Rabbits will shrink and run away when fed an ogleroot. Ogleroots can be bought from Farmer Blinkin for 10 gp, by right-clicking on him, or found randomly during the digging process. This will give you 30 Hunter experience. If a rabbit reaches your flag before the farmer is finished digging up the seed, you lose the flag and get no points. Any excess ogleroots are refunded when you leave the minigame. If a rabbit has already "locked on" to a flagged seed, then any attempts to feed it an ogleroot will fail.

There are a total of 8 rabbits which respawn from the rabbit holes at the border of the field, 2 holes on each side.

Points can be spent by trading with Mrs. Winkin inside the house. 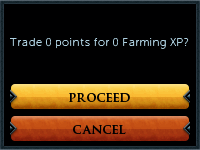 You only get farming experience for trading in points. 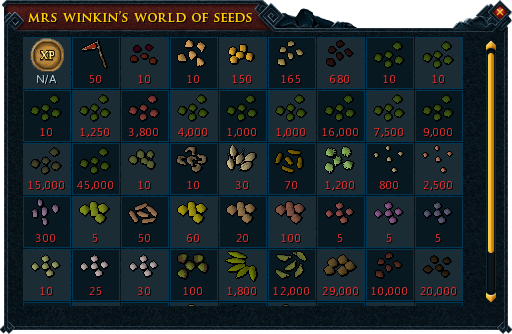 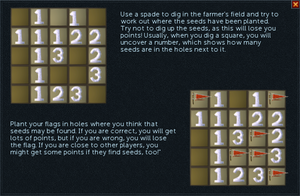 The first of the 4 instructional signs.

Use a spade to dig in the farmer's field and try to work out where the seeds have been planted. Try not to dig up the seeds, as this will lose you points! Usually, when you dig a square, you will uncover a number, which shows how many seeds are in the holes next to.

Plant your flags in holes where you think that seeds may be found. If you are correct, you will get lots of points, but if you are wrong, you will lose the flag. If you are close to other players, you might get some points if they find seeds, too! 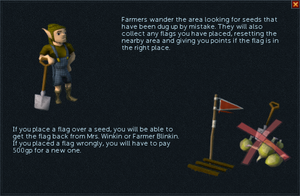 Farmers wander the area looking for seeds that have been dug up by mistake. They will also collect any flags you have placed, resetting the nearby area and giving you points if the flag is in the right place.

If you place a flag over a seed, you will be able to get the flag back from Mrs. Winkin or Farmer Blinkin. If you placed a flag wrongly, you will have to pay 500gp for a new one. 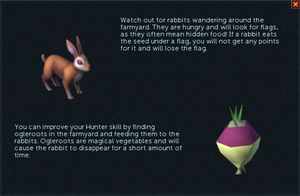 Rabbits will eat your food.

Watch out for rabbits wandering around the farmyard. They are hungry and will look for flags, as they often mean hidden food! If a rabbit eats the seed under a flag, you will not get any points for it and will lose the flag.

You can improve your Hunter skill by finding ogleroots in the farmyard and feeding them to the rabbits. Ogleroots are magical vegetables and will cause the rabbit to disappear for a short amount of time. 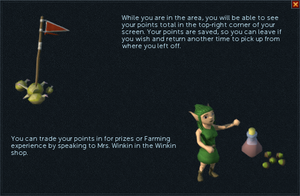 While you are in the area, you will be able to see your points total in the top-right corner of your screen. Your points are saved, so you can leave if you wish and return another time to pick up from where you left off.

You can trade your points in for prizes or Farming experience by speaking to Mrs. Winkin in the Winkin shop.

Most items traded from Mrs. Winkin can be sold to other players or at the Grand Exchange. Flags are not tradeable.

In the table below, experience for planting per seed bought is also given. It assumes an average harvest of 15 for allotments, 7 for clean herbs, 10 for hops, 4 for bushes, 6 for fruit trees, 3 for the cactus, 1 for nightshade and flowers (except limpwurt, which is 3), and 6 for mushrooms (even though bushes, fruit trees, and the cactus can be harvested more than once). Experience for growing a seed can be compared to the points needed to buy it, as points can be traded directly for experience. Note that allotments and hops require planting multiple seeds. 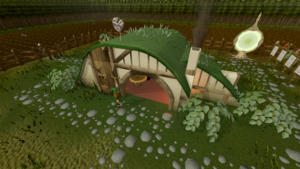