The veteran cape (5 year) is one of the Capes of Distinction, available to accounts that were created on or before 17 May 2017. Accounts which are at least 5 years old can purchase the five-year veteran cape and hood from Hans at Lumbridge Castle for 50,000 coins. Players who do not meet the requirement will be informed how many days are left until they may claim the cape.

The five-year veteran cape and hood can be stored on a cape rack in a player's player-owned house.

Players wearing the five-year veteran cape are able to perform a unique emote by selecting the skillcape option under the emotes interface. To be performed, the 3×3 area surrounding the player must not be obstructed by any obstacles. 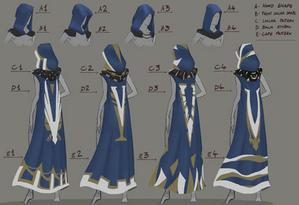 The design elements players were polled on during the five-year veteran cape's Guaranteed Content poll.

Development on the five-year veteran cape cape was first revealed on 17 March 2011 in a Developer blog by Mod Mark, Design Notes: Capes of Distinction. Jagex created a Guaranteed Content poll allowing both free-to-play and members alike the chance to vote on their preferred designs for the cape.[1] Players had two weeks to participate in the content poll, with the voting divided into five categories: Hood design, collar shape, collar pattern, back symbol, and cape pattern. Voting closed on 1 April 2011; the winning design elements were: A2, B3, C4, D1, and E3.[2]

One month after the poll closed, the five-year veteran cape was featured in the May 2011 edition of Behind the Scenes.[3] The following day, the five-year cape was introduced into the game bearing the winning design as voted on by players.[4]

Upon release, the five-year veteran cape, along with all other Capes of Distinction, were revealed to be available to members only; non-member players believed they would have had access to the veteran cape based on statements Mod Mark had said prior to its release.

Jagex staff addressed the members-only requirement on 3 May 2011 via the RuneScape Forums, stating that whilst all accounts that were 5 years old could have the cape, a player also required membership.

During an interview with Eurogamer on the Capes of Distinction controversy, then RuneScape vice president Daniel Clough stated:

Many players who had accounts for longer than five years but not RuneScape membership considered this insulting, and addressed their complaints to Jagex via the RuneScape forums.

In a ninja fix on 17 February 2014, the veteran capes were made available to free-to-play accounts.