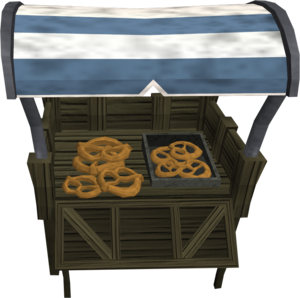 The Varrock Tourist Office is an organisation responsible for managing commerce and tourism in Varrock, the capital of Misthalin. The group is referred to by name only once, in a conversation with Pretzel Bert during the 2010 Oktoberfest event.[1] However, management of the city's extensive tourist industry has been referred to on a number of occasions.

According to Pretzel Bert, the Varrock Tourist Office hired him in order to help encourage commerce in the area. The Tourist Office's presumed activity in Varrock can also be observed in such developments as the establishment of a mine cart station in the Grand Exchange, which was part of a promotion developed between Varrock and the Mining Consortium of Keldagrim.