From the RuneScape Wiki, the wiki for all things RuneScape
< Gielinor Games(Redirected from Varrock Marathon)
Jump to: navigation, search

A checkpoint. You have to pass within a few square radius to "tick it off".

The Marathon was an event available during the 2012 Gielinor Games. It was set in three different locations that, spread throughout Gielinor. The aim was to run through all of the checkpoints and complete the course as quickly as possible. The Marathon did not run all the time on all worlds, but was announced through the in-game chat box on all servers. There were 3 Marathon courses. Players received Constitution experience and contribution points based on their Constitution level and how fast they complete the marathon.

Many players expressed confusion about the Marathon, expecting Jagex Moderators to host the event. In actuality, the event commences itself without any action by Jagex Moderators. The marathons seemed to occur on the same worlds at the same time everyday.

When a message in the chatbox said that the race has started, participants passed through the starting checkpoint (a pair of large torches, also known as gates), and a yellow arrow appeard on the minimap indicating where the next checkpoint is. As you passed through each checkpoint in order, you received a red bannered message in the middle of your screen accompanied by applause and cheers or booing. The magnitude of the cheers told you if your pace is excellent or just average. If you missed a checkpoint there will be "boo-ing" from the audience.

Since the marathon only tracked checkpoints and not routes, direct running/walking was not strictly required. Teleportation could be used to speed up legs. Trying to visualise the route before the race and work out where teleports could save time.

Weight reducing clothing, energy potions or the explorer's ring for its energy replenish ability, the Surefooted aura, or bathing in the saltwater spa in Oo'glog before the race (after completion of As a First Resort) are all recommended.

The obvious strategy to minimise clicking while running a marathon is to try and follow a good runner. Look for players wearing weight-reducing clothing, such as agile armour, spottier cape, boots of lightness, etc.

There was no limit on the number of marathons that could be attempted in one day. However, there was a 30,000 experience cap. After completing a marathon, you could begin another lap by tagging any gate to reset the lap, then return back to the starting gate.

Once the checkpoints appeared they stayed active for approximately 60 minutes by game ticks rather than real time, so any lag caused by the world server would affect the number of laps that can be done before the checkpoints disappear.

When a participant logged out or is disconnected from the game, all checkpoints were reset, and the player had to return to the starting point. 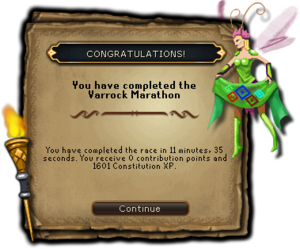 The reward scroll for the Varrock Marathon.

Note: On 1 August 2012, at around 4:30 am UTC, a marathon was announced to take place in World 3. However, the 1 minute warning said the marathon would take place on World 2, and was subsequently held there. 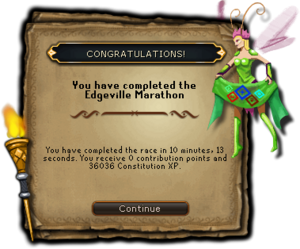 It could be held on world 124 or 137, both of which are High Risk Wilderness Worlds.

Start: Near the Edgeville lodestone 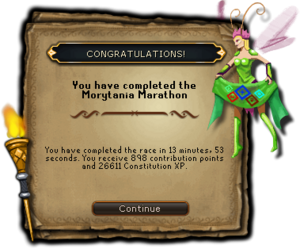