From the RuneScape Wiki, the wiki for all things RuneScape
Jump to: navigation, search
Varrock Census? (edit) 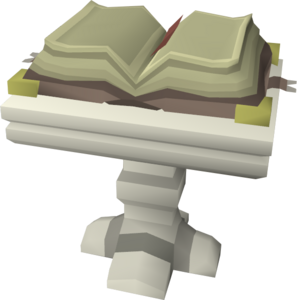 The Varrock Census is attached to a lectern in the library in the Varrock Palace. It lists the names and occupations of some of the citizens of Varrock from the Year 160 during the Fifth age. Since the current year in RuneScape is Year 8 of the Sixth age, it is 17 years out of date (as of 2020).

The census is used in the Defender of Varrock quest to track down the descendants of the Elders of Avarrocka.

Reading the census will cause the player to say it is nine years out of date, which was correct until the release of The World Wakes.