Vampyre Slayer (formerly called Vampire Slayer) is a short free-to-play quest that takes place in Draynor Village. The player is asked to slay the terrifying vampyre count terrorising the village that lives in a large mansion just north of Draynor, with the help of an experienced vampyre slayer.

Head to Draynor Village and talk to Morgan in his home, located just north of Ned's house. He will tell you that a vampyre named Count Draynor is causing distress to the village locals and killing them, leaving the village in constant fear, and asks you to get rid of him. Agree to help to start the quest.

Morgan will tell you to go to the Blue Moon Inn in Varrock and locate Dr. Harlow, who, he says, was a former vampyre slayer. Before heading to Varrock, climb the stairs and search the north-west drawers to obtain some garlic.

Go to the Blue Moon Inn, located just north of the southern Varrock entrance, and marked by a sign on the building with a blue moon logo. Once inside, talk to Dr. Harlow, who appears to be very drunk. Tell him that Morgan needs his help, but he will want you to buy him a beer first.

Talk to the bartender in the room and buy a beer for 2 coins, and then talk to Dr. Harlow again. He will tell you that vampyres can only be properly killed by hammering a wooden stake through their hearts, before promptly handing you a stake and a stake hammer. Harlow also advises using garlic, which can significantly weaken vampyres. 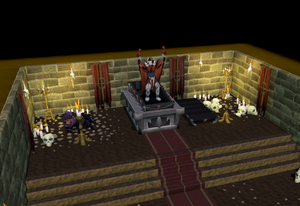 Now that you have the required items, you can fight the vampyre! Apart from the stake and hammer, a weapon, armour and food is highly recommended for low-level players. Although the garlic is optional, it will greatly weaken the Count, so it is recommended to bring some. It can be found in Morgan's house, upstairs in the right set of drawers. 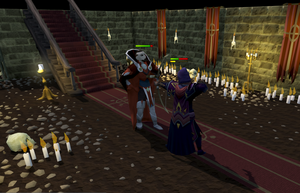 Locked in battle with Count Draynor.

Make your way back to Draynor Village, and head north to the Draynor Manor. Be wary as some of the trees are aggressive. Once inside, go through the eastern door and down the large staircase there. There will be a coffin at the back of the room. Open it and a cutscene will play of you attempting to stake the Count, but it does not go in deep enough. He will teleport out of his coffin and attack you.

If you have garlic, he will become very weak and can be easily defeated. If you don't have any, every time you hit him for 0 damage, Count Draynor will heal himself for 10 life points. If he is not defeated fast enough, he will return to his coffin.

It is possible for low-level players to kill Count Draynor using very low level gear, but be careful to keep your health above 500 at all times. A combat potion might be helpful.

If the Count returns to his coffin or if you leave for any reason, you must return to Dr. Harlow and obtain another stake before you attempt to kill him again.

When you defeat the Count, you will automatically strike the stake with the hammer. If it doesn't happen automatically, try using it manually on the Count. He will fall on his knees and turn into a statue, before collapsing into ashes. The vampyre has been killed! You may leave his tomb and head back to Draynor Village.

You can either use the Draynor Village lodestone to return, or find your way out through the manor. To do so, go back upstairs, then head into the room immediately east, and exit through the door at the northern side of the room.

Return to Morgan to finish the quest. He will be very grateful for saving Draynor Village, and its inhabitants will recognise you as a hero! 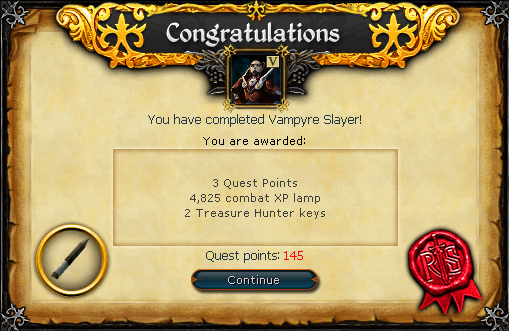 Vampyre Slayer is directly required for the following quests/miniquests: