Hello Snowskeeper, and welcome to the Runescape Wiki!

We are glad you took interest in our wiki. If you have any questions, doubts or having trouble, you can ask them in my talk page, any editor's talk page or you can take a look at the help page. We will happily answer them.

) above the edit box. This will automatically produce your name and the date. Signing your comments is important, as it lets other editors know who has posted which comments.

Don't worry about that: mistakes tend to happen when editing (trust me, I've made horrible mistakes myself, far worse than yours). Moreover, the list is not very clear, because it has so many names in it, so it's easy to miss one.

The "Chaos & Destruction -> New Creation" is also explained in the sentence above it, the one about creative destruction. Could you be more specific to what you don't understand? . . . Yours,

Because it isn't; it's stated that he's the god of Creation and Destruction, which, according to the Book of the Gods, isn't true--he oversees both destruction (he burns the town) and creation (the villagers gain new life from the fire and work together to make ammends). Obviously there's going to be some problem with perception here, like we've had for years what with all the Saradominist information about (best example would be the Wizard's Tower's destruction), but if the Zamorakians perceive him that way, that's the way we should describe him. Snowskeeper---Till Hell Freezes Over. (talk) 18:27, June 3, 2013 (UTC)

He's the God of Chaos and destruction.
He Destroy, this destruction causes Chaos. Through this Chaos (re)creation can occur. This is his will, this is his goal, his way.

This is basically what happens/is made clear in Zamorak's art in the Book of the Gods. So, what is missing then? . . . Yours,

You are apparently confusing most things. I never said God letters quotes should be in articles, I told Kinglink15 to replace them and not remove them if they are still canon, that is, if there are other sources stating the same thing somewhere else. Sorry but I would like to advise you to not intervene in contexts that you are not participating because that could magnify the matter, I hope you understand (: Have a nice day!

Please read my messages more carefully...Read it again please. "...I never said God letters quotes should be in articles, I told Kinglink15 to replace them and not remove them if they are still canon, that is, if there are other sources stating the same thing somewhere else..."

Sigh I'll stop trying to make your read my messages more carefully, you apparently don't have that that ability.

"...I never said God letters quotes should be in articles, I told Kinglink15 to replace them and not remove them if they are still canon, that is, if there are other sources stating the same thing somewhere else..." I said IF they are still canon (still stated somewhere else in game) NOT that they should "always" be replaced as you stated. If is a conjunction used in English conditional sentences, it expresses one condition, and the condition was they being still canon (stated somewhere else but in the god letters)....You have been repeating my idea for like 8 messages just for not reading carefully what I said. I really hope you understand now...I really do...It's getting worrying...

"I've been reading your posts. What you're saying is that they should always be replaced with something new. What I'M saying is that if there isn't anything that can be used to replace them, or if replacing them does not seem to be necessary, they should be removed anyway, as they are inaccurate. I'd also appreciate it if you didn't stoop to personal insults when you're feeling frustrated about an argument."

"Once again, if you have to try to insult me during the course of an argument, you should really just stop. And once again, there is NO CASE where the God Letters can be considered canon, regardless of their context or contents. They have been declared non-canon. We have been shown that Guthix doesn't actually talk like he does in the God Letters; I very much doubt Saradomin and Zamorak do. So using those quotes is equal to a misrepresentation of the facts. Once again I bring to your attention the example of using fanfiction in wikia articles. You would not accept this, right? It's exactly the same way with this"

Well to start with, I would like to ask you to present the quote where I said "they should always be replaced with something new" and the part where I made a "personal insult". Second, you are not paying attention...I am simply *asking* you that IF there is another source stating the same thing as a god letter quote, simply remove the god letter quote and put the quote from the other source (replacing). I never said nor wanted god letters quotes in articles, I never ordered you to replace something. And if there is another source stating the same thing as a part of the god letters, the statement isn't inaccurate. You said there is absolutely no case where the god letters can be considered canon, well, you were wrong; Saradomin's name is equal to his name in god letters and I replaced a statement from god letters in the article of Gielinor that was more than canon. You said they have been declared to be non-canon, well, they have not been declared to be non-canon, there is a message saying we shouldn't base on them for lore, simply that. And yes there are many mistakes on god letters and as I said above, I don't want them as source nor base my knowledge on them; I myself voted for the god letters' removal by reporting them as bug. About the fanfiction part (which I didn't understand), you didn't present any example of fanfiction and I do not add fanfiction to articles, thank you. Well if you read this message properly you'd understand.

Thanks for the notice. =) I was just thinking about that issue, actually. Runescape does a great job of leaving it absolutely vague about who's good and who's evil (the new Rune Mysteries quest was awesome for that), and I feel that even if the God Letters are clearly marked as non-canon in every article they're mentioned in, it's colouring perceptions. Snowskeeper---Till Hell Freezes Over. (talk) 19:02, June 8, 2013 (UTC)

Well, actually, to be even more precise: the general planet on which we play the Game RuneScape is called Gielinor (as named by Guthix and adopted by the early inhabitants invited by Guthix - if I'm correct). But due to the amount runestones found on this planet, made by Guthix with the stone of Jas, over the centuries people began to call Gielinor Runescape (as a landscape with many runes). So, if you would say "the realm of RuneScape" you're referring to the game, if you say Runesape you might be referring to Gielinor. Mod Osborne used an analogy once. He sees the universe/multiverse in the Game of RuneScape as a (Swiss?) cheese, the one with many holes. Each hole is a universe, the cheese between these holes is "The Void", and the Abyss is a "glue" plane that sits between realms and holds them together, probably the edges of the universes - because it doesn't seem to be the same as The Void. So, Gielinor is a planet with a moon (Zanaris) revolving an unknown/unnamed star that is found in one of the many holes. But... I could also be wrong :P . . . Yours,

A notable feature should be one which is particularly outstanding, defining, and unique. Notable features should also (usually) be limited to their role in storylines. It is irrelevant what specific actions an NPC carries out in gameplay.

Being limited to quickchat is not notable. A few reasons why are:

It's fine to make note in the article, but please tell my why you believe this driveling fluff is worthy of being considered a "Notable feature". MolMan 23:44, June 14, 2013 (UTC)

His Quick Chat limitation IS limited to his role in the story. One of his most annoying features is that he can't say anything coherent because he can only use Quick Chat. What you're implying is that King Roald's position as King isn't a notable feature because it has roughly the same effect on what he can do and how he acts. Snowskeeper---Till Hell Freezes Over. (talk) 23:52, June 14, 2013 (UTC)

No, I'm saying that his being limited to quickchat is unimportant, whether or not it plays a role in the quest. It's notable in the sense that it's a tidbit of trivia, but how is it notable enough to place it in the box that is meant to be the basic of the NPC? MolMan 23:56, June 14, 2013 (UTC)

Currently, it's concise, clear and explains what is meant. If necessary, it can be explained in greater depth within the article--going back to the King Roald example, you don't explain why being a king is a notable feature; you just say "Is a king" or whatever. The effect it has on his character, etc., is left for the article itself to explain.
Also, sorry for not responding to this on your talk page; I don't really understand why that's a good idea to do since it seperates the information between several pages and makes it harder for people to join in on either side of the argument, but even so I only did it because I keep forgetting these are different from normal talk pages. If it inconvenienced you in any way, I'm sorry. Snowskeeper---Till Hell Freezes Over. (talk) 00:07, June 15, 2013 (UTC)

My problem is more that it is worded in a poor and weaselly way. I may or may not attempt a reword. If not, I guess it'll stay that way whether I like it or not. But is this an agreeable compromise? MolMan 00:09, June 15, 2013 (UTC)

Hello, Snowskeeper. I see you have a disagreement with another user about the contents of a page on this wiki. May I suggest you discuss this dispute with the other user, either on the talk page of the article in question or via user talk pages. If you continue to edit war in this fashion, admin intervention may result in one or both of you being blocked from editing for a short time. 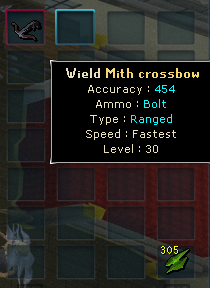 I included the rest of the inventory so you can see it is a current-game picture. The name is quite clearly mith crossbow, not mithril as you erroneously claimed in your move reason.

There is absolutely no reason for them to be there. The idea that someone doesn't find a link because they "missed it" is a terrible argument. It's called overlinking and it should be avoided.

RS:SG#Wiki-linking
Every time an article is mentioned on the page, you don't have to link to every single one. For example, lobster may be mentioned five times. You only have to link to lobster once. You can link to articles more than once if the page is very long.

Transcripts are meant to be verbatim, and links obviously aren't in the original text. Also, you skipped over the first use of the word "pests", where a wikilink would ideally go, in order to place it within the quoted text. Why?

Please do not upload images in order to use them on talk pages.