From the RuneScape Wiki, the wiki for all things RuneScape
< User talk:KnazO(Redirected from User talk:Ozank Cx/Archive 1)
Jump to navigation Jump to search

Hey, just so you know in future, it's best to check the rare drop table part of the drops section on monster pages, to make sure that what you're adding isn't there already. Saves it from being reverted almost instantly.

Hello, Ozank. You are currently disconnecting and reconnecting to the wiki's <nowiki>[[Special:Chat|on-site chat]]</nowiki> frequently, causing several join and leave messages to appear. To fix this problem, you can try refreshing the page and checking your connection. Thank you. Hair 23:23, June 21, 2012 (UTC)

Sure! My ingame name is Gaz Lloyd, predictably. You should also specify which cause you are donating to: the events team prize fund or the citadel raffle prize booster, or both. Thanks in advance,

Hello. You have been invited to Jr Mime's (Muud's) 99 Dungeoneering party THIS Sunday/Saturday (8-9).

I honestly thought it would have taken more tries to get this:

Hi, I noticed you undid a revision of mine. I'd like to inform you that the GWD's goblin's combat levels have changed because of the EOC. What I put in was correct, as I was standing right in front of one.King kolton9 (talk) 02:18, December 21, 2012 (UTC)

Relevant to your interests[edit source]

I know, but I wanted to make it clear that new laptop doesn't mean I'll be there right away. I'll likely be editing on the RSWiki with my pos computer on Monday. MolMan 13:27, February 16, 2013 (UTC)

Would you mind posting a link to your profile picture? 'Cause, y'know, it's totally amazin'.

Rarely is it wise to actually open a bottle of milk, flavoured or otherwise, of unknown age that you have discovered behind furniture.

There's a quote saying: "I've seen numerous examples of your attitude having a negative effect on other users in the chat (according to memory). "

If you want proof, just put the following into google:
site:https://runescape.wiki/w/RuneScape:Chat/Logs/ "who cares"

Here's one example of his wonderful attitude to others not in chat:
https://runescape.wiki/w/Forum:Treasure_trail_scan_pictures
"Please note that as far as I can tell with how well I can predict the future, I'll be doing this no matter what. If there's no consensus, I'll just do it my way. That means this is pretty much your one chance to guide me on how you want them done. That's not to say I'll be taking awful pictures just to spite, it's just that if you don't like how they turn out, you're shit out of luck."
I love how he'd make a thread asking for opinions, just to add that he would do what he wanted regardless. --Jlun2 (talk) 14:06, November 6, 2013 (UTC)

You didn't watch it? Wtf. I watched the first 45 minutes on the actual TV. Then my dad dragged me to the store and I finished the second episode on youtube. MolMan 17:08, November 24, 2013 (UTC)

Reminds me of me in the mornings.

Hey make sure you have anti-aliasing checked. You're transing images fine but just remember to check off the box in case you unchecked it for whatever reason. --BrenRS (talk) 01:33, December 14, 2013 (UTC)

RE: Your edit on elite scan page[edit source]

I was planning on moving the file to a properly spelled name but I can't seem to simply move an image file. Any help with that? It's spelt Jatizso, no Jatizo.

It was a link to File:Scan clue Fremennik Isles Jatizo between two buildings with anvils.png that I broke btw.

Please use the following files, which were uploaded a day ago, on a mainspace page:

All images, as you know, must be used in mainspace. Please ensure this is done in a timely fashion in future.

They were in the mainspace at the time I uploaded them. From the looks of them one was replaced by another image and the other was renamed. – Ozank Cx 11:49, December 30, 2013 (UTC)

You just banned me from My Little Pony Wiki. I've thought about this, and wishing everyone cancer in the chat was a horrible thing. You may think I'm a troll, which is true, I'll admit to that, but I never say actual cruel and mean things until I've gotten really mad. When my friend, ImmaGleek was banned for three days and mine was lifted to two hours, it annoyed me and I came back to the chat to just cuss everyone out and wish the worst, because for some reason this darkside came out of me. You prolly won't forgive me, and I understand, but if you could just tell the chat that BelleLover is sorry, that would be great. I don't expect to be unbanned, but I just want you to know I truly am sorry.

I'm having some trouble repairing some images:

Sorry again, but can you please help me with this: [4]

Regarding that kick in chat[edit source]

Hey, I didn't mean to kick you. Feel free to come back in the chat room. Haidro

Nah it's okay, you did the right thing really as it was right before I was going to put a text wall which would probably have led to one anyway but I won't bother now; I think I won't come back for a while. – Ozank Cx 11:09, March 22, 2014 (UTC)

When you want to merge pages like you indicated here, you have to actually make the request on here.

that is an awful angle of Lapalok. -- 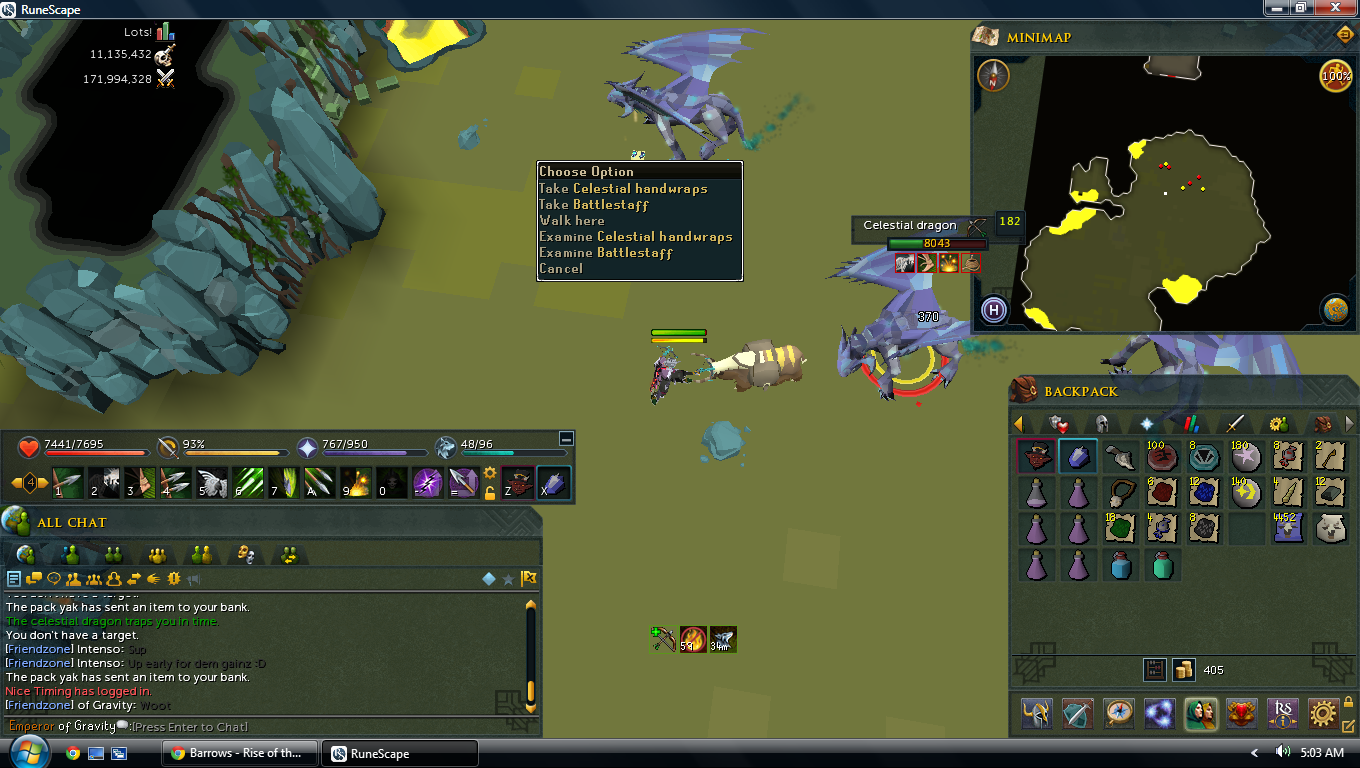 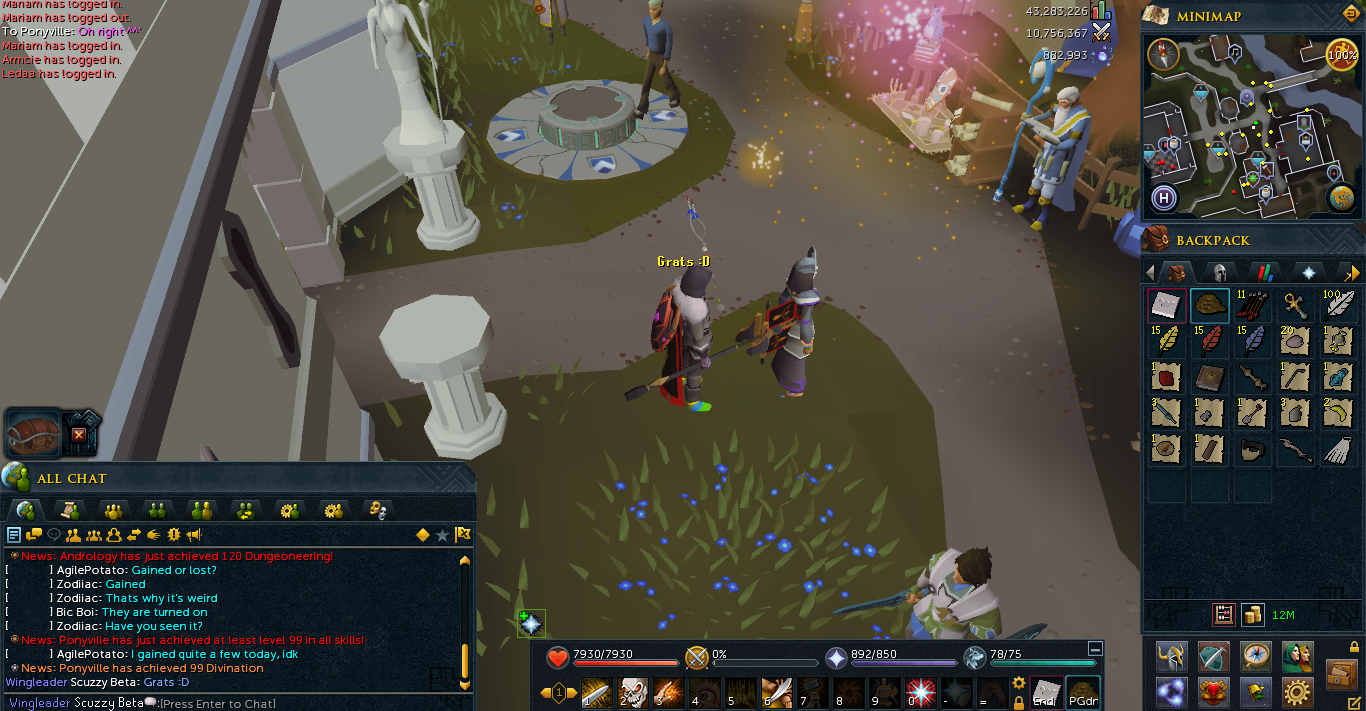 When I delete my account, will this remove my profile page and talk page, or will they still be accessible? (EverythingRuneScapeHQ-Cnecomicz 17:28, April 29, 2014 (UTC))

Relevant to your occupation[edit source]

Why did you insta remove the image I made? It contained useful information which wasn't availible before, I did it especially for this page and took me ages to makeRsCyan (talk) 23:59, May 10, 2014 (UTC).

We already have an image for the tier 5 aura - having another is redundant and unnecessary. Cramming a lot of different weapons with it together isn't a reason to duplicate showing that. – Ozank Cx 00:01, May 11, 2014 (UTC)

irrelevant to your occupation[edit source]

so I won't forget this link[edit source]

Why was I banned on the chat when I didnt even do anything?  —The preceding unsigned comment was added by Callum Fawsitt (talk).

Oh thank you very much for explaining this too me,

I am not a troll or anything since I have previous experience on the Club Penguin Wiki,

I understand some of the admins are a bit rude but you seem fairly kind,

I was not aware of the Drop rate estimations table. However, the current drops listed as uncommon do not share a similar drop rate with the signet drops, and they instead share a drop rate very closely matched with the ascension keystones. (I have had 12 signets and 11 keystones in my last two bow attempts.)

If we must follow the drop rate estimations guide, it is of my opinion that the Keystones and Signets should be listed as uncommon drops, with the other regular drops listed as common drops. I can not suggest an appropriate drop rate for the Ascension grips, due to a lack of drop data. If you feel that this is the appropriate way to go, we can edit the drop rates appropriately.

Ah, I've just noticed User:The Mol Man's edit too. However, as before, if you feel that my estimation is unreasonable, feel free to change the edit.

No and I will expand on that even more than you asked for. I made it because that's Jagex definition not a mods 'opinion', feel free to listen to the podcast. And if you disagree pls tell me why preferable mention the seconds in the podcast (+ verbatim, since people seem to disregard things they don't many things, even if there literal quotes saying otherwise), or a different source, where it's clear I'm incorrect. . . . Yours,

saw you were working on golden godsword pages, here are some links if needed :)

This video is private.

Just wondering, can you see the picture? Because I can't. Pictures of these size I usually put a set of brackets around it so it turns into a link which shows the picture much more clearly. See here. Funds (talk) 00:54, October 1, 2014 (UTC)

something for your pk alt[edit source]

It's now possible to get turmoil with 1 defence if you reset. This gives players who reset an advantage. If a player does a quest, resets def, and redoes the quest, he does not get /any/ experience, including defence.

This means that players will now not get ~30def from doing quests. Also, they will be able to do Dragon slayer and stay 1def.