From the RuneScape Wiki, the wiki for all things RuneScape
< User talk:Gaz Lloyd
Jump to navigation Jump to search

I have made the scraper, with Cursed Pyres' code to get the data from the clan home high scores.

I ran the script for today on User:A proofbot. See the results here and here.

Hai. I think it's time to enact the changes discussed to the logo. The blackout is very controversial, and we weren't really able to come to a consensus on it. Whereas the logo change was only indirectly opposed by 3 users (ajr, Coolnesse, Edmyg). And the first two didn't elaborate much on their reasoning. Everyone else seemed to either support the logo change, we're open to it or had no opinion. As it is now the 18th in my timezone, we can't really discuss it any longer.

Also, a short explanation for the logo change should be positioned at the top of the main page, as well as in the sitenotice/community corner thingy. Then we can link to a longer temporary page (RuneScape:SOPA, maybe) with a more in depth reasoning. We should also have some kind of call to action, (email/call senators) as Degen suggested. Just thought I'd try and nudge you in the right direction, nub.

While your thread failed to net us a blackout with consensus, Wikia added in a partial "blackout" of its own: for IPs without ad blockers, all the ads are replaced with SOPA and PIPA banners, and the background was blacked out. So even though the proposal lost, it still (kinda) won. Hofmic Talk 06:25, January 18, 2012 (UTC)

Aww do I have to transparentise that now?

oh god why ponis damnit gaz you and i need to talk - Internet will be up and running tomorrow, can you let Lady Roselai know for me, thanks (She wants to get started on Dungeoneering asap heh). Also sorry if I screwed your page code up, your ponis kept distracting me TIA BROSKI

For some reason, my signature is messing up...

Hmm... I checked that; I must have missed something. Thanks for all your help, and sorry to always bug you about needing it.   Zurwyn ▸
Choose Option
Talk to Zurwyn
Write Zurwyn
Contributions Zurwyn
Signature Zurwyn
Spam Zurwyn
Examine Zurwyn
Cancel
12:26, April 19, 2012 (UTC)

I notice you've signed up for this year's Family Photo, but haven't sent in your picture yet. Please try to have that in by the first of March. If you need someone to take your photo, please ask me on my talk page, and I'll take the image for you.

Since you seem to be nonresponsive on the IRC, I'm just here to tell you that I've made an image host wiki for personal images like citadel stuff. Please upload to there in the future. I also sysopped you there, in case you wanted to delete/move/modify the images that I already uploaded. I've already modified the links to the existing images. --LiquidTalk 01:06, February 23, 2012 (UTC)

Hey, when you ban people from Special:Chat, can you please fill in a form at RS:CHAT/B, just so that our records are up to date and that the rest of us know what they were banned for and when the ban is to be removed?

I noticed you banned SafelyFast from chat, but haven't posted an expiry at RS:CBN or anything like that. Could you deal with this please? Thanks, Smithing (talk | contribs) 18:32, March 5, 2012 (UTC)

Gaz, given the discussion we had about managing misc page - which you now edited - you may want to edit the calculator page too.

Note that, contrary to popular belief, your yield is determined by the approval rating when the money is withdrawn from the coffers, not when you retrieve the items.

I don't know enough about MM to make the edit with any authority. You seem to.

You have been nuked.[edit source]

Dude, I was removed from the Rs wiki clan, what happened? Can I be re-added or what?

Hey, Gaz, I need help... Again... My stats page is messing up, and I can't figure out why my stats table is messing up. The table worked before, and now it's not...

Hmm... Okay, thanks for the heads up. If Wiki code is anything like HTML, I should be in good shape.
Thanks again,   Zurwyn ▸
Choose Option
Talk to Zurwyn
Write Zurwyn
Contributions Zurwyn
Signature Zurwyn
Spam Zurwyn
Examine Zurwyn
Cancel
12:07, March 27, 2012 (UTC)

Thanks for reverting the undo. You're right that the difference is minor if you update once a week. If you were to go a full month without updating, as I did for the test, it's about a 15% drop. Of course things are 2.5 times worse if you haven't done Royal Trouble.

On the /doc subpages, categories should be in includeonly? Why not noinclude?

Hi there! I see you've added javascript to your wiki to change the way search works for all users here. Today, we made an announcement about some changes we're making to better reach our common goals with search: adding a personal preference for "go" search, adding redirect support to search suggestions, and speeding up search suggestion responsiveness (you can read about these in the blue update box of this blog post).

However, since the search field is a critical part of Wikia functionality, changing it for all users is a violation of our Terms of Use, and we need to ask you to remove your code for this wiki. (You're welcome to keep using it in your personal view.)

Hi. I want to put this file into the leaks page: Entangle update.png

But I don't know how to use code. So I was wonder if you can do it? I got this leak from the recent combat evolution video. The mod hovers over the actionbar that's off screen for a second and this box appears. They changed the runes you need to cast the spell, as well as the time a player/monster is frozen.

Hi. I want to put this file into the leaks page: Entangle update.png

But I don't know how to use code. So I was wonder if you can do it? I got this leak from the recent combat evolution video. The mod hovers over the actionbar that's off screen for a second and this box appears. They changed the runes you need to cast the spell, as well as the time a player/monster is frozen.

I don't have the time to commit to it anymore.

Hey I want to be in the ET and I applied for it but I saw that some other people got declined because they dont have any edits. I just started my account because I wanted to be on the ET does this mean that I wont get accepted? Ice Cloud8Ice Cloud8

THERE IS NOTHING YOU CAN DO[edit source]

I just logged in for the first time in months. There are several things I'd like to address: 1) I will probably not play RuneScape very much from this point on. I have noticed that JaGex has become more like Aeria Games as of late. This not only bothers me because I don't like Aeria Games but rather that JaGex said that they would not use RWIT. From infrequent views and reviews of the updates I cannot play this game or any game written by JaGex. It just bothers me that they inplemented the whole Squeal of Fortune and the summer update for the one million experience, or whatever that was. I only really played the game for dungeoneering and I will probably come back for a short while when they release the dungeoneering finale to comeplete my 120 goal and then that is just for shits and giggles. At this point I believe Dungeoneering is a seperate game as it hasn't been "tainted" by the RWIT issues I previously pointed out. 2) I resign from the Events Team, this is due to a) my long absence and b) my lack of playing and membership. I have already noticed that you have removed me from the ET, thank you. 3) Feel free to remove me from the Clan Member list if you want, I will not be online enough (or at all) to be an active member and I will be a waste of a slot.

I believe that is it, thanks for the patience and for dealing with my unreliability.

Gaz, I see you offering to use endless amounts of Slayer points to test spell damage formulae. Let me know on my talk page if you need anything. --OneEyedGnome 23:16, August 17, 2012 (UTC)

You can go ahead and remove me Gaz. I don't plan on returning anytime soon.

Hello, my time of Runescape is coming to an end soon, so I was wondering if I could donate 10M to you and you could buy up to 10M worth of stuffs for a drop party, I really like this wiki and thought i'd give some of my money to do something fun for the people of it. Don't worry I won't regret it, 10M is about 0.7% of my actual bank so I'll be happy to give it, just tell me your rsn and i'll give it User:Ozank (Talk) 20:12, August 25, 2012 (UTC)

Please let the other four wardens know that they must dismiss the avatar before logging off. Not doing so denies access to it by the other wardens. Thanks --Degenret01 (talk) 05:13, August 26, 2012 (UTC) 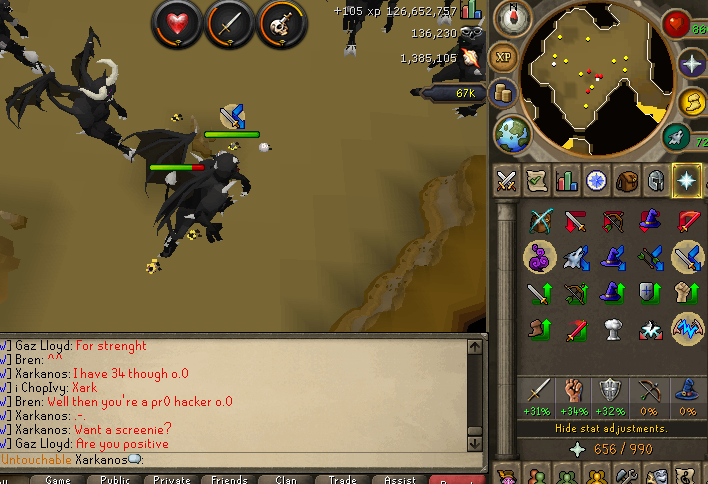