Hello, I'm not sure if you are aware of this, but the hitpoints stat has been updated and called life points, and you now have 10 times as many life points as you had hit points. Also, food now heals ten times as much. Thanks for your contributions, and happy editing! Ajraddatz Talk 19:16, March 4, 2010 (UTC)

Dry Dock behavior might not be a glitch[edit source]

You wrote "my ship got damaged and needs 2 hours of repair only for it to work like nothing happened" in your notes on a change to the port page. Could it be that you didn't check the voyage until 2 hours after it completed (e.g. if you launched the voyage before going to sleep)? When you return to the game after the voyage completes, it seems to take 0-2 minutes for the game to register that the voyage is complete, then you may get the message that dry dock time is required, but you're basically given credit for the time since the voyage would have completed. So if you check the voyage status 2 hours late,  you won't have to wait the 2 hours in dry dock.

I think there's no need to print an image, just try to note whether a lot of time has passed since the voyage was initially supposed to be finished. If you check your voyage around the expected finishing time and you're able to use your ship even though you were told it had to go to drydock, that would definitely be a glitch...Haystacks (talk) 03:07, January 20, 2013 (UTC)

I'm still curious about this glitch. Was it:

Could you post the answer on my talk page? It really makes a difference in how the glitch should be described in the page. Haystacks (talk) 22:26, January 20, 2013 (UTC)

Please remember to capitalise the first letter of the task explanation cell as well.

If your haste to update the page removes your ability to spell, either slow down or don't edit it!

Thanks for making those pages though.

The old wisdom aura page has an additional explanation between brackets: "you will not be able to activate Wisdom again 24 hours after activating this aura, only 24 hours and 30 minutes afterwards". If I activate an aura at time X, and I can activate it again at time X + 24.5 hours, given that the aura remains active for 30 minutes, then the cooldown period is 24 hours, not 24.5 hours. E.g. Jack of trades (prior to the hidden update) is active for 30 minutes, and has a cooldown of 23.5 hours, allowing you to activate it again exactly 24 hours after you last activated it. So, is the cooldown really 24.5 hours (allowing you to reactivate Wisdom 25 hours after your last activation) and was that additional explanation wrong, or are you counting the activation time as part of the cooldown time? IP83.101.44.209 (talk) 08:27, December 16, 2013 (UTC)

Yes, that was indeed a rather poor explanation... as it doesn't answer my question. I never contested that it was changed to recharging at midnight UTC; I was asking whether you were confident about a cooldown period of 24.5 hours + an activation time of 30 minutes (25h total before you can activate it again), as opposed to a cooldown of 24 hours + activation time of 30 minutes (24.5h total before it can be activated again). The time an aura is active is not part of the "cooldown" time. IP83.101.44.209 (talk) 09:48, December 16, 2013 (UTC)

If they have their own pages, they shouldn't do.

Do not change Legendary back. If you do so after receiving this message, then you will be edit-warring.

Can you avoid making pages with nothing more than a blank infobox? It's not anymore helpful than the page not existing. At least fill in some parameters or write a brief sentence please... MolMan 16:52, February 23, 2015 (UTC)

You either need to make an indication that you're going to be using the edit session, do all your work at once, add everything that should be there, or suck it up and not complain when things are edited. MolMan 23:52, March 23, 2015 (UTC)

I'm not sure if you're aware, but you can check the XP to the decimal precision: 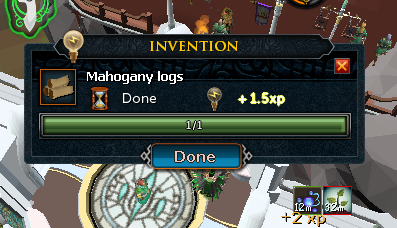 It's just a joke. So getting the wrong Shandong doesn't matter... On the other hand, Shandong Hongda is entirely about this same, wrong Shandong. Oops... Do you know off the top of your head any good sources? I'll need to find time this month to make an article on the correct subject. MolMan 13:30, April 1, 2016 (UTC)

Hey, I'm going to let you finish first, but in the future, please transcribe any texts from game (e.g. from books) in the transcript namespace. In this case, Transcript:The Covenant of Perpetual Conflict. If you want the transcript to appear on the article about the item, you should use:

Check the edits I just made. I'll go back to the module some time later and give a more helpful message than that script error. MolMan 14:42, April 25, 2016 (UTC)

Why did you put in an invisible list version of something that was already in the prose?

Hey! Just checking back through RuneScape:the Wikian/Users, and you don't appear to have claimed your title yet. Please contact me in-game (accounts Gaz Lloyd or Gaz L) or via RS:DISCORD to arrange a meetup so I can grant it :)

Hey Extreme133! I wanted to give you a heads up that there's a thread (Forum:Leaving Wikia) up for discussion right now about moving this wiki (and OSRS wiki) away from Wikia, to a self-hosted, Jagex-supported site. We'd love your input on the proposal (and the new wikis). Thanks!