Leave your messages below :P

My RSN is Lil Diriz 77. Did you need to talk to me about something? If so, well, I really don't play RuneScape anymore, so you wouldn't find me online. I could talk to you elsewhere, of course.

Hey, no problem!, glad I could help

Hey, look, I think you are making too big a deal about it. I just saw that the image that you uploaded might not truly say "Lumbridge Castle" to the readers. If you are too close to your images, just revert it back and tell me about it. I won't change it back. But please, don't give me shitty reasons such as "pain for my eyes", please. Thanks. Alchez 12:09, December 14, 2011 (UTC)

Hmm thats odd, the reason I deleted it in the first place was because it popped up on Special:UnusedFiles... I dont know whats happened. I'll restore the image. emosworld 19:27, December 24, 2011 (UTC)

Why are you reverting to your older version? The current one is larger, is more smooth, and does not have any costume items (*ahem*). If you are reverting simply because you wish for your image to be featured, please read RS:OWN.

Costumes can only go so far. What about, for example, to show the keris dagger, we had a user in full virtus with some sort of skillcape and aura? Also, how do having no costume items on make us robots?

Oooh. So not only were you revert-warring, but you ignored a request to talk about it? This does not look good for you. I strongly recommend that you not do that again. Brush up on RS:OWN and RS:3RR before uploading any more images. --Andorin (Talk) (Contribs) 00:56, December 28, 2011 (UTC)

If it matters, I'll change my clothing (which seems like a costume, but I know what ya mean) to a more basic one. If that doesn't resolve it I don't know what doesn't. --

Because someone only finds his own work worthy to commend, he has to replace it without looking at RS:AGF. Meanwhile every new image is signed, marked, with that monotonous appearance which has been voted against in the RS:IMG policy. These contributions result in a few users to RS:OWN the RS:IM as they see fit. For all the above mentioned reasons I have reverted this image.

First of all, this reasoning does not justify violating RS:3RR. Second, your quotes do not demonstrate any policy that we must have images with unique outfits; it merely says that they are allowed. Your version is of lower quality, and the fact that it has a unique outfit is not reason enough to choose it. --Andorin (Talk) (Contribs) 02:43, December 28, 2011 (UTC)

The fact that you "only" made three reverts to the image doesn't exempt you from 3RR; trying to claim that it does breaks RS:GTS. The point of 3RR is to prevent revert warring. You were revert warring. Talk out disputes next time instead.

I understand your position on outfits, but bear in mind that image quality is our foremost concern. Naturally, we want the best quality possible. Compared to this, outfits are not very important. If one editor uploaded a high-quality image of a player, and a second editor uploaded an image with equal quality and a different outfit, the second would most likely be deleted as unnecessary unless it were better than the original. Note that a unique outfit is not necessarily considered better, just different. --Andorin (Talk) (Contribs) 21:41, December 28, 2011 (UTC)

Thanks worked a treat.

Now the body is upside down?

I'm not as active as I used to be, so I don't really know what images you're talking about. As for the policy, its still in effect, but I haven't really thought about it in some time. The minute the restriction against wearing things besides the item intended to be shown was lifted, it became impossible to enforce and therefore utterly meaningless. Asking people to take off all equipment before taking the shot was, in my mind, justified. However the current policy is so insubstantial that it can pretty much be ignored. "You can wear stuff but you shouldn't wear the same thing over and over... or like, the same group of things... basically anything that you wear often, you shouldn't wear in images... you know? its like uhhh if people would look at it and say 'oh, that's editor1230's image!' then you should take it off... but don't worry about it or anything! If that makes sense... yeah...." Crystal clear.

Ah, I see now. Yes, the new base clothes complicated things even further. Now the base clothes are even more eye catching and unique to each user than any equipment ever was. There has been no discussion about how the new base clothes affect the image policy, but I doubt there's anything that can be done about it, short of specifying an actual set of base clothes to have each person wear, and it seems very unlikely that people would embrace such a guideline.

Alright. That does it. What's wrong??? This is the 2nd time you've attempted to start a revert war. I am wearing base clothing, which the previous version was wearing the Pharaoh outfit and the Pharaoh's sceptre, and a slightly larger file size. And I saw the previous post. I don't add watermarks, dude. --

Just so you know, RS:AEAE applies only in discussions. It was due to abuses such as the one you just used that it was changed to SAOW

Yes there was no rule to justify his upload, but neither was there any rule to justify your reversion. As he has stated, his version was smaller, and presented a smoother animation due to the fact that the sceptre didn't keep on popping up at the beginning and end of the loop. That would be justifiable reasoning for his version. What is your justification for your reversion?

Smaller file sizes are actually preferred, as they take less time to load therefore reducing the lag when loading pages. I don't see how that is lame. And spine's version shows the actual emote just as fine as the original version, so really that isn't an issue. As I've stated before, his version is actually better as the sceptre doesn't pop up ruining the smoothness of the emote which to me makes it better

If 2 images have the same quality then the smaller file size is preferred. In the Give Thanks enhanced emote gif, spine's version has superior quality as it does not cut off parts of the character. Also, as I've stated before, as spine does not weild a weapon his hula hoop emote is higher quality as the weapon isn't continuously popping up. If the original hula hoop gif didn't have the weapon, spine's would have been preferred on the file size

Oh! It would appear you are right! I'm terribly sorry.

A need to converse[edit source]

Hey Elf, can you please join the chat? I need to have a word with you privately. Just want to to talk about the issues between us privately. Please? :) --

Please understand that this detail caused edit warring in The Firemaker's Curse and Upcoming updates (the part that states that Jagex has made three or four Grandmaster quests), and that this is an attempt to resolve this edit war. If you wish to add your input, for both of those pages, please refer to Talk:The Firemaker's Curse#Difficulty controversy.

If the difficulty of the quest should change in-game to Master in an update during the coming weeks, then it shall be changed to Master again.

The difficulty of the quest is now Master in-game. The controversy is gone.

Hey Elf! I'd like to request that you reinstate my image of supreme salvation you removed. It looks very similar to master but I can confirm it is most definitely supreme, I have master salvation on my main and I stould next to the person in the picture, I can assure you it's the supreme as I discussed it with her and reviewed it myself.

Splendid work!!!! I love you now. Also I believe he has a chathead when you kill the last champion required to reach him? --

Please do not delete the line DO NOT DELETE THIS LINE in the hallowe'en's page, as it is used to remind other editors not to delete the whole <!-- --> section.

On a second thought, I agree that writing a simple description is better than copying from the full list. Sorry for the conflicts I created before.

Hey, I checked the stats in the equipped interface. It should be accurate. :) 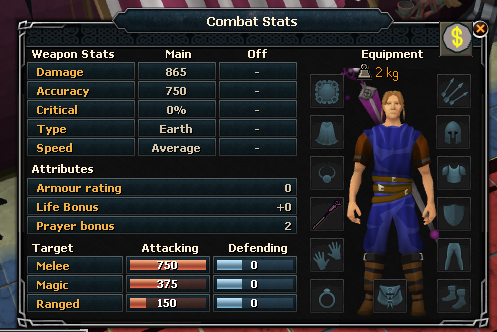 Hmm, well that's quite odd. It's safe to assume Jagex perhaps done some miscalculations, like they did the armour rating. Very well, leave it blank until they're fixed. --

That actually could be the damage rating for the spell itself, after some thinking. --

What was I ninjaing exactly? The files? I was just cropping and compressing them (you should have before uploading wink wink). Categorize them as part of the stop. I could easily be doing all that other stuff you're doing, but I'm not, right? MolMan 15:35, March 15, 2013 (UTC)

Why are you being so hostile? You don't know me, you don't my age; why bring it up? I'm sorry if I editconflicted you, but it's not a big deal. You weren't doing a major rewrite, you were adding a category or two. Calm down. As for the cropping: no, it wasn't entirely necessary, but it takes such a small fraction of my time that it is no harm to do. Practically every image is cropped so its bounds are the last pixel of each side. I'm older than the Wiki, just as an fyi. And do you really believe a 6 year old has the mental capacity or dexterity to have produced the level of contributions that I have in the timespan that I have?
You're complaining over who gets to do a mundane minor edit. That's the most pointless argument to have. It was a small tidbit of work and it got done. No difference between who does it and, in the end, no one should care. MolMan 15:50, March 15, 2013 (UTC)