So this is editing on the android, if it ruins your talk page it isn't intentIonal. However it looks like it may push this edit to the top of your page. Yes we should figure a way to catch up (just got your message). Any ideas? Oh and my Sig isn't working on this either. Shoot me a reply when you get a chance. Atlandy  —The preceding unsigned comment was added by Atlandy (talk) on 05:42, April 12, 2014 (UTC).

I'll try and be of the IRC nightly from 9-11EST during the week.

I'll have to figure out a way. She is 9...almost double digits!

look what I found![edit source]

Kyle, dont make theese edits without discussing it with me and oil on the yew grove. your being an asshole MolMan 18:47, November 25, 2014 (UTC)

All I want for Christmas...[edit source]

Elaborated explanation concerning the whole issue, which most points stand when my thread is ready.

But back to what you said, I still fail to see how it is my fault. One, Mol Man is a senior and a veteran I use to look up to, and if name-calling was what he could get away with, then so could I. If you don't think this is healthy for an atmosphere with budding new editors everyday (like this wiki), then you must be smart and eradicate the root and all traces of it. Otherwise, it is okay for me to do it if you don't seem to notice that he's the one starting this trend.

Two, the chat is merely about me trying to find help as quick as possible regarding his odious attitude towards me so I don't know what I'm going to be afraid about posting them.

And if you're going to use the reason of me falsely accusing him of calling me a vulgar term, then that is basically just a small issue. That was a misread on my part because of my rash actions after knowing that he was (and will) continuously harass me. If you take that into consideration, that is little to almost no effect to what Mol Man has said to me and many other people. Furthermore whether it was directed to me, him or anyone else, he should never have resorted to using crude language in a situation where you are trying to reach an agreement, because obviously it comes off to me as an intertwined insult.Just

Really? You missed the part where he called me a terrible writer and even going as far as to give me a lesson when I don't need one because in his eyes, my English "sucks" and doesn't live up to his standards? And the time when he called me selfish, offensive, and downright despicable just because I stand by my own stance? And don't make me look up the countless people he has given nicknames too, be it in a friendly way or not.

Again, if he wants to reach an agreement with me, show me a presentable attitude. If he stoops that low to degrade me and my capabilities (which isn't of his concern), it's only natural anyone would be defensive enough to go that low as well. Like I said, if he could do it, why can't I?Just

The amount of people involved in this is really unacceptable. I think it would have been better for you to speak to Gaz, who was already handling the situation, rather than butting in and leaving your own opinions on the user's talk page. Please remember not to toe-step on other admins. Likewise, I'm not attempting to toe-step or anything like that. It's just that reading through all of this drama has been a complete disaster because of the amount of people & talk pages involved. In the future, please just leave it up to the admin that is already involved unless asked.

Sorry for jumping the gun - I've been informed that you didn't randomly get involved but that you had been involved in the chat. Like I told Mol though, I still don't think it's a good idea to bring it back on the wiki and get involved again. >.<

Skype told me so

Hi Christine :) I've proposed to desysop inactive admins per recent security concerns, see Forum:Security of sysop accounts. Whilst you don't immediately qualify for desysopping, as you have less than 5 edits in the past 6 months I wondered if you'd be willing to have your rights removed voluntarily under the conditions outlined in that forum? Thanks, cqm 08:30, 10 Aug 2015 (UTC) (UTC)

No, as most of the edits I did make were specifically admin-related. I'm confident in the protection of my account, though I understand where you are coming from. I still think it is helpful to have. Christine 02:36, August 16, 2015 (UTC)

A note about the Ring of Stone.[edit source]

I'd just like to mention a correction, regarding one of your recent edits - the Ring of Stone. 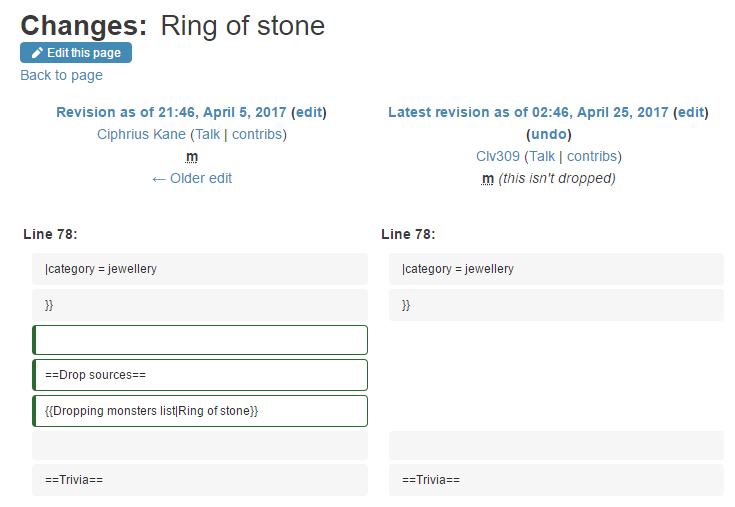 It is dropped by TzHaar/TokHaar creatures, as listed on the news post: http://services.runescape.com/m=news/new-luck-items--luck-rework

"The existing ring of stone is unchanged, but is now a drop from TzHaar and TokHaar."

This is also mentioned on Reddit multiple times, with users confirming they received a drop. FlanneryLueMoore (talk) 04:32, April 25, 2017 (UTC)