From the RuneScape Wiki, the wiki for all things RuneScape
(Redirected from User talk:BrenRS)
Jump to navigation Jump to search

^ The guy there is really a liar, look at the timestamp![edit source]

Congratulations, man! I'll see if I can come, it might be too late for me, but I'll try. User_talk:Fswe1 Fswe1

Awesome! I'm not sure if I can be there (it's a bit late for me on a Monday night), but I'll try nonetheless.

Thanks for the invite and early congrats! But I've been having a lot of trouble with my internet, so if I don't come, don't be upset! I'll try my best and show up, at least via PM or something! Congrats again! :3 --

Early congratulations on achieving that milestone. Unfortunately it appears that my work schedule has me on for the closing shift of tomorrow night so I will be unable to attend. Hope you continue to achieve what you desire. Sincerely, Ryan PM 06:22, December 4, 2015 (UTC)

I saw you uploaded a detailed image of the RC master cape (gratz btw =D), how did you make that image?

I want to do the same for the Farming master cape, and I was wondering how you made that image. What did you do to get the detailed image?

Okay thank you and what should I do with the cape? Wear it? Drop it on the floor? Use it on the orb of oculus? Sorry, I'm a noob when it comes to images :P.

Sorry I couldn't make/missed your 120 Runecrafting party. Late congratz though!

Floor 19 is not even abandoned, that's furnished... So you glitched (or misread the floornumber, idk) and it got fixed by now, because what Manti tweeted is how the RS code currently works with DG journals. I saw that your revision was in August, it's December now. Personally I got M. and Thok #4 on floor 17.

Hey, sorry about the late response. I honestly have no idea why I deleted that image - it's been such a long time. I think the most likely reason was that the image was not being used and I couldn't find a place on the quest page to put it at the time. Not completely sure though. Haidro seems to have taken care of it so hopefully everything is now resolved. Suppa chuppa Talk 21:56, December 24, 2015 (UTC) 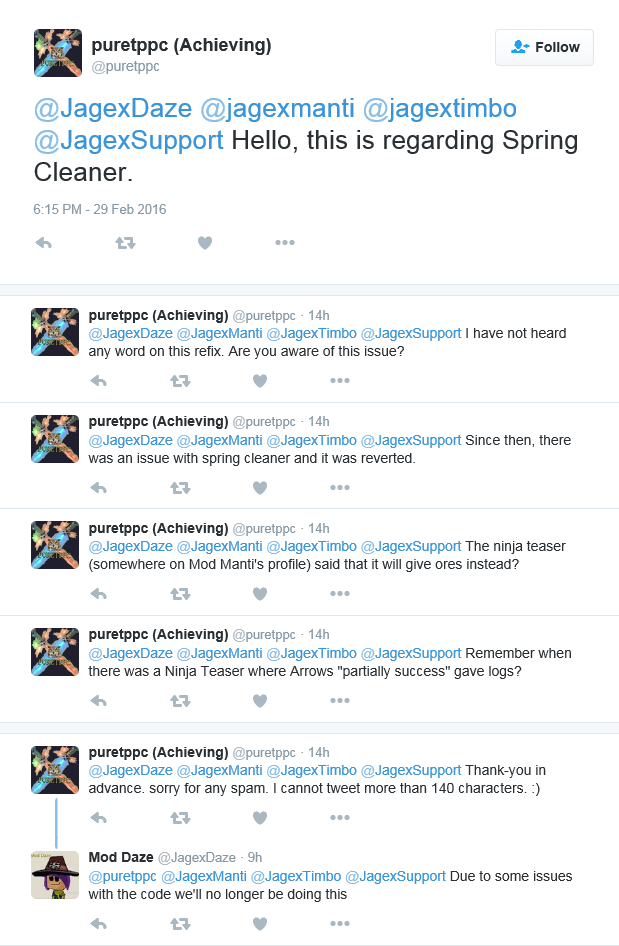 I saw your message on Mol's talk and I wanna say that I'm already working on something like that, it's called Template:Variant. Currently it only supports up to two links, but I'm currently writing a module for it to support more.

I removed the bolding as that is unnecassary. Also nothing needs to be added, they work. As for the dyed items, see Drygore longsword for how to do that.

Yeah, I noticed that too. But I don't know why it does that :S.

"Thanks for making it less spaghetti. Was hoping you'd come to the rescue. It was literally a clusterfuck of people wanting to do different things. Looks like you cleared it up basically."

This was your message to Mol, let's disect it.

"Thanks for making it less spaghetti." - First of all it wasn't spaghetti, it was perfectly readable and did what it had to.

But yes Mol did improve it by splitting it up to multiple lines, which works fine.

I made an attempt to fix it, but it didn't work. So I nowiki'd the whole thing. Maintenance is allowed with DEU. If you don't like it, find a proper fix to the problem yourself MolMan 01:03, March 16, 2016 (UTC)

So no, I didn't make it a red link. Spine fixed it and you, with your immense ignorance, figured that spine's fix was the way it was initially, which it wasn't. If I find issues with red links (which came from Special:Wantedpages by the way), I'm going to edit your pages. I don't care what you say. Maintenance is exempt from DEU. If you don't want me editing your pages, don't have them screwed up in the first place. MolMan 12:27, March 16, 2016 (UTC)

Isobel already talked about this in Discord with me, I haven't changed the scale on any of the maps (at least not intentionally) from 100%, and I've only used the mini map when I open the world map and it shows either; the ground floor (such as for anything in the Grand Tree) or centres the map (such as when you try to view the world may in Player Owned Ports). I have however been zooming in on the minimap, and am gonna try the next few of those fully zoomed out, which appears to be the same as 100% world map zoom, so I'll see how they look and, if necessary, go back and re-make some of the other mini-map ones.

I have always done 100% and not changed any scaling. Also always use world map.

Hi there, I've noticed you've been leaving a bunch of script errors while updating the quest guide chat options. I assume this isn't intentional, just wanted to let you know in case you were unaware. Both the tower of life and back to the freezer are covered in errors RsCyan (talk) 22:30, March 19, 2017 (UTC)

Can you export it as a png for me and upload it somewhere? --

So I tweeted Mod Tron about "which one is the real one" and it seems as though the general consensus was that its adaptable. So in other words, it shouldn't really matter which shade of black they use. --

To extract sprites from (java) cache, you need a tool called steve sprite editor, you might aswell also want to download rs cache downloader before jagex fuck up java cache on april 10th. It will download all cache data and get you all the sprites (because in live game its not static). More detail on steve sprite editor usage here: http://decryptedroms.wikia.com/wiki/RuneScape#Sprite

Your request for the Wikian title is successful. Please contact Gareth for the title. --LiquidTalk 23:42, April 9, 2017 (UTC)

RE: No, I'm not a livestreamer.[edit source]

Sorry I missed it, but at least I bring cake 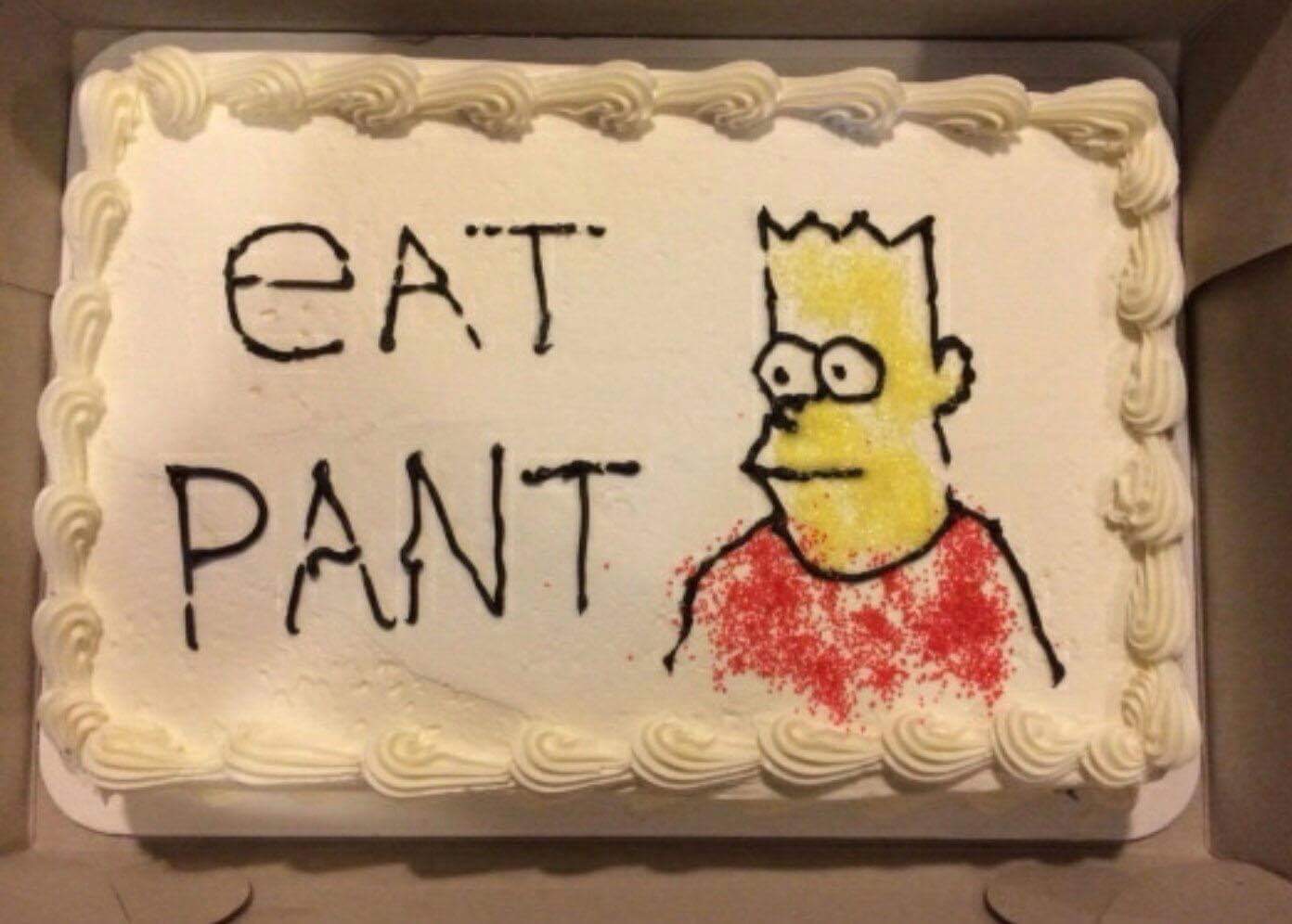 Re: Who are you[edit source]

Thanks, I appreciate you acknowledging! I've just been enjoying questing and Runescape in general lately and though why not improve the quick guides while I'm at. Chat options, quest boss tips, getting there info etc that was lacking on some guides and made me stall on some quests as a result. I didn't want others to have that problem so I decided to contribute :). --Lyrixn (talk) 15:32, June 11, 2017 (UTC)

What do you mean with "it does show a space in the beginning of the list item"? Could you show a picture comparing the two situations? Your efforts are dearly noted. :)

That was exactly the reason why I created {{Globals}}. =D

The variables that you added to the module, could you add those to the template's documentation as well? Template:Globals/doc.

I am the Real Capital Willow from Menaphos :P[edit source]

First of all, I am too. :P But why would you even want to add a description? The place where you're using it only needs the variable and the documentation should tell you what the variable does, so why add it? (Or am I completely missing the point? :P)

Not if you keep them synchronised. :P

Hi, I was wondering how it is possible to achieve the formatting of the timestamp like how you did for yours?

Thanks for the guide and tips :D

A preceding space before an asterisk (*) is only good inside navboxes for formatting the code to make it more clear. Other places with asterisks shouldn't have a preceding space, that's only on navboxes. :p A trailing space after an asterisk is fine though for readibility.

Why did you remove the navbox from four quest quick guides?

They are supposed to be included. Since they are linked from the navbox.

Has something changed? The page says the coif isn't included?

TyBot currently waits 2.5 seconds between items when updating the GE prices. Though the actual waiting time between calls to the GE database are likely longer since it has to make several calls to the RuneScape Wiki's API.

PvM Hub content is subject to change and may not even end up in the game because of it being created during a Game Jam. Please expand the pages you've made to give more info and indicate that this content is not in the game. The currencies page and other live content pages should not be updated unless and until the content is released. jayden 17:19, 23 October 2019 (UTC)

Hey mate thanks for pointing that out. I am still learning the ropes with Photoshop so i'm not perfect just yet, I will take on your advice and start watching out for those edges as well as fix up the bad ones I have done. Cheers for pointing out my mistakes :) IBeeprofen (talk) 10:26, 7 April 2020 (UTC)

Hello Brenr! I had closed the thread a little prematurely; the thread has been re-opened to allow for discussion. Apologies for the back-n-forth and any confusion. Reach out if you have any questions! :) --Legaia 2 Pla ᴛ · ʟ · ᴄ 23:33, 14 May 2021 (UTC)

Hey there, I noticed you requested rollback+custodian rights a while back, as well as requesting AWB access. You still had the custodian right from back in 2012, but I've given you rollback rights as requested. I haven't yet added you to the AWB checkpage, because I've got a question about that: it seems you're already on the checkpage with your bot account, so is that sufficient, or would you like me to add your main account to the checklist as well? − Joeytje50 talk 14:02, 7 June 2021 (UTC)

It looks like the bot rights were removed, but the username highlight was kept. I can understand the username colouring staying intact to keep it clear that this was a bot edit. So, right now your bot account isn't flagged as a bot in the user rights, but it is coloured as a bot and still has access to AWB. Would you like to request bot rights back on your bot account, or would you prefer AWB access on this account? The former I can't do (if you want that you should probably change your Request for Permissions to request bot rights for your bot, instead), the latter I could do. But if you want the former, I think I can poke someone who can, if you first edit your request for permissions. − Joeytje50 talk 14:58, 7 June 2021 (UTC)