Re: Your revert on Veteran cape 5 removed important information[edit source]

Then please find a way to word it so all the info is on that page so you don't have to link to the talk page, which is why I removed it.

Re:Your revert removed endangered information half the wiki has been fighting to keep after being subject to repeated vandalism[edit source]

You know how many IPs use source mode, where <!--Hidden messages--> are clearly visible? Or pay attention to however they are indicated in visual mode? Practically none, and the ones that do aren't the sort that vandalise. Plus external links do not work so well when the only way you're going to see them is in edit mode.

Plus a "free respawn" and "located in a lvl 72 thieving chest" aren't exactly the same thing to me. Don't see how they are to you. Gonna edit that to be more factual. If that is okay with you, that is.

Maybe if you actually read my rewrite, you would see that any thing I removed either was not trivia or had been integrated into the main body of the paragraph. MolMan 14:42, September 9, 2012 (UTC)

Re:Where is the link to the slayer masters' shared shop page?[edit source]

Slayer equipment should be it

I've got a recent changes page open while I play, and I added the bottom table on that page just the other day.

Instead of updating every reference, why not leave the image where it is supposed to be according to RS:IMG? MolMan 21:28, October 1, 2012 (UTC)

Indeed I should have done that. I overlooked the easy and logical solution. But at least it works, aside from successfully confusing 2 people, for which I am sorry. 3ICE (talk) 21:30, October 1, 2012 (UTC)

Re:Every day I come here trying to figure out which altar is best to teleport to. Requesting calculator. Or a table. Or something[edit source]

I saw your message on Talk:Wicked hood and made Wicked hood#Profit in response. Hope that's something like what you wanted. Sorry but I don't know how to do an xp table as well, never mind a calculator.

Also, the quest name is misspelled in game but we use the game spelling as basis for everything.[edit source]

Tranquillity is the British spelling, so it's not misspelled.

In cases like this, please change the anchor instead of the link, as subheaders should have sentence capitalisation. Also, please don't leave underscores in links.

Unfortunately, the IP's cannot help it. That HTML crap is added by the Visual Editor. :S

Thank you! Pretty cool to get a rare title just like this. I've now added myself (in-game display name) to the list of wikians and soon will be arranging to meet the esteemed carrier of the one book. Sincerely, 3ICE (talk) 15:24, December 15, 2016 (UTC)

Re: Why the Notification?[edit source]

The notification system is a new feature on Wikia that we tested out by sending one that is relevant to the wiki. It was sent to anyone that has been active within the last 90 days on the wiki (regardless of if you have the title or not). Apologies if it is inconvenient.

I think Wikia intended to mark it as read by clicking it, but for now you should be able to click the icon here (or the 'Mark all as read' button): 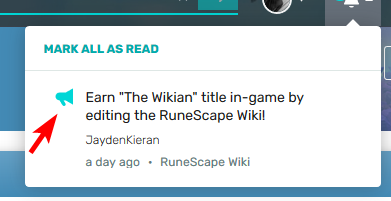 This is so informative, thank you very much! Unfortunately my "mark all as read" button disappears after a split second upon page load. (This is wikia bug, nothing we can do about it here on rswiki.) The arrow in your picture points to a non-interactive icon (at least it is so, for me). So I'll just ignore it, for now. I bet it times out or expires after some time. It's 4 days old now. 3ICE (talk) 22:52, July 21, 2018 (UTC)

Hey! Thanks for the message. I just had a check ingame because I own a couple of chaotic lucky items. You're correct about the destroy message being wrong, They're actually "Are you sure you want to destroy your Treasure Hunter prize? You can reclaim it in its broken form from Diango in Draynor."

Just checked the broken versions, and they have a slightly different one from the fixed version and current version on the message, so I'll change those too Talk-to Kelsey 23:31, July 21, 2018 (UTC)

Hey 3ICE! I wanted to give you a heads up that there's a thread (Forum:Leaving Wikia) up for discussion right now about moving this wiki (and OSRS wiki) away from Wikia, to a self-hosted, Jagex-supported site. We'd love your input on the proposal (and the new wikis). Thanks!